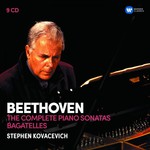 "He is in his element, responding wholeheartedly to the extreme physicality that Beethoven brought to music ... but the wit and delicacy of the playing are also remarkable." Kovacevich himself has spoken of his love for the "fun and virtuosity" of the composer's early sonatas, while in the often challenging later works he sees a "subtext of radiance and some sort of inherent faith in life."

"a powerful reminder that nobody plays this music more authoritatively and eloquently...he is in his element, responding wholeheartedly to the extreme physicality that Beethoven brought to music...But the wit and delicacy of the playing are also remarkable." Sunday Times, 7th March 2010 ****

"One of (Kovacevich's) many strengths is his capacity to illuminate aspects of the music without recourse to any form of didactic exaggeration. He trusts his listeners, and he trusts Beethoven. The sources of apparent spontaneity are many and mysterious, but Kovacevich seems to have mastered them to a fare-thee-well."
***** Five Stars BBC Music Magazine (Aug 2001)