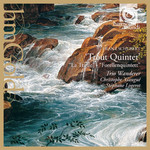 "The Wanderers and their friends play both works with irresistible freshness and brio, making one listen afresh to the glories of Schubert - and regret the neglect of Hummel."
Three stars (Excellent) The Sunday Times

"This is an inspired coupling, exquisitely rendered."
The Observer

According to his friend Albert Stadler, Schubert's celebrated 'Trout' Quintet was based, at the request of the patron who commissioned it, on an earlier piece by Hummel for this unusual combination of instruments. Given the respective dates of Schubert's work and of Hummel's op.87, the latter was probably not Schubert's model; but its reputation as one of Hummel's finest compositions is amply justified here in this highly appropriate coupling.