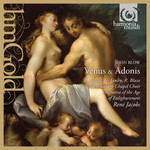 The blossoming of the English opera.
First performed before the court at Oxford in 1681, Venus and Adonis was presented as a "masque for the entertainment of the King" (Charles II). Like Purcell's Dido and Aeneas, it is in fact a true opera, totally successful in concept, original in musical content and moving in the characterisation of the protagonists. Borrowing the notion of the overture, the prologue and the instrumental dances from the French opera and juxtaposing them with the language of Italian music, Blow here created his masterpiece and one of the summits of 17th century English music.

"As the lovers, Rosemary Joshua and Gerald Finley employ their creamy, sensuous voices in a continuing flirtation with each other and with Blow's ornaments. Joshua is particularly stirring in Venus' final lament. Countertenor Robin Blaze is appropriately playful and a little spiteful as Cupid. Conductor René Jacobs and the Orchestra of the Age of Enlightenment…show a clear command of style and deliver their music with a smile, in both accompaniment and ritornellos." (Opera News)

"René Jacobs surrounds himself with many fine singers here, all of whom he marshals in lively and responsive performances. Rosemary Joshua is an irresistible Venus, who wastes not a word either in colourful representation of vocal suppleness, and Gerald Finley's reflective longing accords with Jacobs's elegant and full-flavoured direction…This admirable new recording puts the work on yet another footing." (Gramophone)

Lamentations Of The Renaissance
more suggestions…