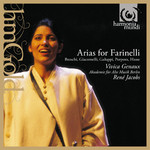 "While Vivica Genaux has all the virtupsity needed to negotiate the intricately embellished lines in these songs, she knows, too, how to use ornamentation for expressive effect. Strongly recommended."
***** Five Stars (Pick of the Month) BBC Music Magazine (July 02)

"While Vivica Genaux has all the virtupsity needed to negotiate the intricately embellished lines in these songs, she knows, too, as did Farinelli, how to use ornamentation for expressive effect. Strongly recommended." ***** Five Stars (Pick of the Month) BBC Music Magazine (July 02)

"The American mezzo Vivica Genaux is a major star in the making...coupled with Jacobs' stylish accompaniment, Genaux's faultless presentation of this richly ornamented music easily overcomes any risks in the repertoire."
FOUR STARS
The Independent

"Genaux's bright, clean, firm tone and fluid technique make remarkably light work of the hoop-la but it's down to AAM Berlin to provide the interesting musicianship in Galuppi's C minor Concerto a 4."
The Independent on Sunday (12 May 2002)

"...it seems fitting to have Farinelli - the most famous castrato ever - impersonated by a contralto, especially when she is as expressive and agile a singer as Vivica Genaux. All the pieces are wonders of lyrical embellishment, and one or two are genuinely moving."
FIVE STARS
The Times

Thanks to the cinema, Farinelli is now popularly seen as the archetype of Baroque vocal art. His timbre and technique were an inspiration to the composers of his time, and many opera arias bearing the mark of Farinelli have come down to us. A selection of these, many of them never recorded before, is performed here by the American mezzo-soprano Vivica Genaux, one of the few singers capable of doing justice to this demanding repertory. Long acquainted with these virtuoso arias and the vocal technique they require, René Jacobs has provided specially written decorations for each of them.

Lamentations Of The Renaissance
more suggestions…