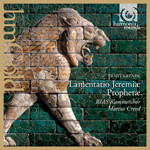 When Ernst Krenek wrote these Lamentations in 1941, his music had been banned by the Nazi regime as 'degenerate art' and he was an exile in the United States, where he earned his living as a teacher. Ingeniously combining the polyphonic tradition and the language of dodecaphony, Krenek bases his work on the liturgical heritage of the Roman tradition (the Lamentations of Jeremiah often set as Tenebrae lessons) while making his own selection from the words of the prophet.