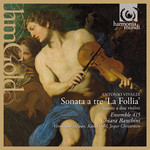 Born in Lugano (Switzerland), Chiara Banchini is one of the most renowned "baroque" violinists on the international musical scene.

After graduating with a prize for virtuosity from the Geneva Conservatory she completed her studies with Sandor Vegh and then went on to explore the baroque violin with Sigiswald Kuijken. She was awarded a soloist diploma by the Royal Conservatory of The Hague.
In addition to leading the career of an international concert performer, Chiara Banchini taught the baroque violin at the Centre for Early Music in Geneva before being appointed to a chair in the instrument at the Schola Cantorum in Basel.

In 1981 Chiara Banchini felt the need to fill an empty space in the Swiss musical landscape and founded her own chamber orchestra, the Ensemble 415. It was a resounding success. Distinguished for its virtuosic and flamboyant playing, the Ensemble 415 undertakes regular concert tours and has made a series of extraordinary recordings of works by Corelli, Boccherini, Muffat and Vivaldi. These recordings have been enthusiastically received by the international musical press. The Ensemble 415 performs both as a large formation and as a chamber orchestra.
Chiara Banchini plays a violin by Nicola Amati (1674)