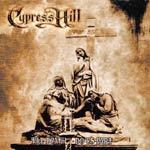 Cypress Hill
Till Death Do Us Part

Cypress Hill's impressive career is both summarized and advanced on "Till Death Do Us Part", the group's long-awaited 7th studio album on Columbia Records (and tenth release overall). "Till Death Do Us Part", which, like its name, offers an intimation of dark mortality with moral tales propelled by the band's patented slamming hip-hop beats, Sen Dog's booming signature voice on choruses, and the group's patented wide-screen narrative raps.

"We wanted to take it back to what it was in the beginning," says B-Real during a break at DJM studio, where the new album was recorded. "It's all raw hip-hop with rock touches, reggae and the Latin thing we started with. We just let it come to us from there. We vibed the record out as we went along. And whatever we liked at the end, if it sticks like glue, we made it happen."

The first single from the Album, 'What's Your Number' is a musical tribute to the Clash's classic "Guns of Brixton," with a backing track performed by a live band featuring Rancid's Tim Armstrong.