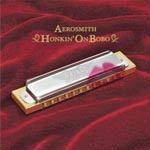 Aerosmith's album for 2004, Honkin' On Bobo, features the band returning to their roots with an album that highlights their connection to blues and roots music. They cover a diverse collection of classic blues / roots songs performed in true Aerosmith style. The album also features a new original Aerosmith song entitled, 'The Grind'.

Produced by Steven Tyler, Joe Perry and Jack Douglas (with additional production by Marti Fredriksen), the album's 12 tracks, including such classics as 'Bay Please Don't Go', 'Eyesight To The Blind' and Road Runner', encapsulates the classic Aerosmith sound that has set the tone for generations of rock music.

"We didn't record a blues album, we recorded an Aerosmith album. Everything Aerosmith has ever done has been influenced by the blues. This time around we just brought the influence a little closer to the surface."
- Steven Tyler

"'Honkin' on Bobo' just brings it on home how well Aerosmith can take a song and make it their own, in true kick ass rock 'n' roll style. If you thought this band got put out to pasture with Diane Warren-penned soundtrack songs and ballads ending with in' (Cryin', Amazin', etc.) - then think again. 'Honkin' on Bobo' shows that they are still the same cool dudes who can play up a storm together. All but one track is old-time covers (Willie Dixon, Bo Diddley, etc.) with lots of grinding rhythm - hard blues that rocks!"
- GEOFF

The Ballad of John Henry

Driving Towards the Daylight