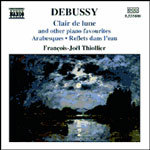 Debussy was born in 1862 in St Germain-en-Laye, the son of a shop-keeper who was later to turn his hand to other activities, with varying success. He started piano lessons at the age of seven and continued two years later, improbably enough, with Verlaine's mother-in-law, allegedly a pupil of Chopin. In 1872 he entered the Paris Conservatoire, where he abandoned the plan of becoming a virtuoso pianist, turning his principal attention to composition. In 1880, at the age of eighteen, he was employed by Tchaikovsky's patroness Nadezhda von Meck as tutor to her children and house-musician. On his return to the Conservatoire he entered the class of Bizet's friend Ernest Guiraud and in 1883 won the second Prix de Rome. In 1884 he won the first prize, the following year reluctantly taking up obligatory residence, according to the terms of the award, at the Villa Medici in Rome, where he met Liszt. By 1887 he was back in Paris, winning his first significant success in 1900 with Nocturnes and going on, two years later, to a succès de scandale with his opera Pelléas et Mélisande, based on the play by Maurice Maeterlinck, a work that established his position as a composer of importance.

Debussy's personal life brought some unhappiness in his first marriage in 1899 to a mannequin, Lily Texier, after a liaison of some seven years with Gabrielle Dupont and a brief engagement in 1894 to the singer Thérèse Roger. His association from 1903 with Emma Bardac, the wife of a banker and a singer of some ability, led eventually to their marriage in 1908, after the birth of their daughter three years earlier. In 1904 he had abandoned his wife, moving into an apartment with Emma Bardac, and the subsequent attempt at suicide by the former, who had shared with him many of the difficulties of his early career, alienated a number of his friends. His final years were darkened by the war and by cancer, the cause of his death in March 1918, when he left unfinished a planned series of chamber music works, only three of which had been completed.

As a composer Debussy must be regarded as one of the most important and influential figures of the earlier twentieth century. His musical language suggested new paths to be further explored, while his poetic and sensitive use of the orchestra and of keyboard textures opened still more possibilities. His opera Pelléas et Mélisande and his songs demonstrated a deep understanding of poetic language, revealed by his music, expressed in terms that never overstated or exaggerated.

It is difficult to hear [1] Clair de lune (Moonlight) with new ears, so familiar did it become, even in Debussy's lifetime. Poetic and evocative, it suggests the nostalgic world conjured up by Verlaine in his Fêtes galantes and formed part of Debussy's Suite bergamasque written between 1890 and 1905.

[2] La plus que lente, a waltz that is slower than a slow waltz, dates from 1910 and has the direction Molto rubato con morbidezza, a hint, perhaps, at a mildly satirical intention. It has proved popular in its original form and in a variety of transcriptions.

[3] & [10] The two Arabesques rival Clair de lune in popularity. The first, in E major, has a contrasting central section, while the second, in G major and in similar form, makes much use of a decorative motif heard at the opening, a justification for the title.

[4] Le petit nègre (The Little Negro) first appeared in Théodore Lack's pedagogical Méthode de piano in 1909 with the original English title of The Little Nigar. It has much in common with one of the pieces in the Children's Corner Suite, written for his daughter Emma-Claude and given English titles, a reflection of Debussy's anglophilia and perhaps of the influence of Emma-Claude's English governess. [5] The Snow is Dancing evokes the scene of the title, [6] while The little shepherd opens with the delicate expressiveness of the shepherd-boy's flute, contrasted with a dance motif. [7] Golliwog's cakewalk is a light-hearted version of a dance that had been popularised in the music-halls of Paris in the 1890s.

[8] Estampes (Prints) was published in 1903, to be first performed the following year by Ricardo Viñes. The second of the three pieces of the group is La soirée dans Grenade (Evening in Granada), an evocation of Spain. [9] The set ends with Jardins sous la pluie (Gardens in the rain), a reworking of the earlier unpublished Image under the title Quelques aspects de 'Nous n'irons plus au bois' (Some aspects of 'We shall not go to the woods again').

[11] Valse romantique opens with the melancholy simplicity of Erik Satie, before moving into more conventional territory. In conclusion the melody is brightened by a change from minor to major, a touch of final optimism. The waltz was written in 1890.

[12] Danse first appeared in 1891 as Tarantelle styrienne, to be revised in 1903 and published again under its present title. It is none the less a tarantella, with all the vigorous rhythm of that dance.

[13] The busy Toccata, published as the third and final movement of the suite Pour le piano in 1901, was first heard in a performance by Ricardo Viñes in 1904. It is an energetic tour de force, a brilliant contrast to the movement that precedes it in the suite.

[14] Debussy published the first set of his Images in 1905, opening the group of three piece with the evocative Reflets dans l'eau (Reflections in the water), compared by the composer to dropping a pebble into the water and watching the ripples moving outwards.

[15] Poissons d'or (Goldfish) ends the second set of Images, published in 1908. The piece was seemingly inspired by two goldfish on a lacquered Japanese panel in Debussy's room, but in the music they are brought to brilliant life, as they swim.

[16] Debussy's Mazurka of 1891 adopts the Polish dance that Chopin had introduced to the salons of Paris sixty years before. Melodic turns of phrase are immediately recognisable as Debussy's, using, as they do, characteristic forms of scale. In F sharp minor, the piece has a D major central section.

[17] Rêverie was written in 1890 and published in 1903. Marked très doux et expressif, if offers first a gentle melody over a repeated accompaniment pattern, developing into a passage of contrasted mood and tonality, before the return of the material of the opening.

Debussy's two sets of Préludes were published in 1910 and 1913 respectively. [18] From the first come the gently expressive portrait La fille aux cheveux de lin (The girl with the flaxen hair), a piece that has been much transcribed, [19] Minstrels, allegedly inspired by a black street-band heard in Eastbourne in 1905, [20] and La cathédrale engloutie (The submerged cathedral), an evocation of medieval France and the ancient cathedral of Ys, now beneath the waves, its chants and bells heard through the sea-mist.
- Keith Anderson