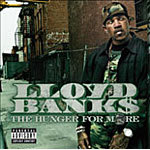 Lloyd Banks
The Hunger For More

In 2003 he was crowned the street's number one artist, appeared on the year's top-selling record, and sold another two million-plus copies of an album with his own rap troupe. Lloyd Banks now brings you The Hunger For More.

Lloyd Banks is unsatisfied. Unsatisfied, despite having an incredibly successful 2003. A 2003 where he was crowned the street's number one artist, appeared on the year's top-selling record, and sold another two million-plus copies of an album with his own rap troupe. Lloyd Banks is so unsatisfied he's titled his G Unit/Interscope Records debut The Hunger For More.

"When I say The Hunger for More, it could be referring to more success," says Banks, the lyrical submachine gun of 50 Cent's G Unit arsenal. "It could be more money. Or respect. More power. More understanding. All those things lead up to that hunger for more, because my 'more' isn't everybody else's 'more.' I feel like I made it already, because I already got what everybody on the corners of the neighborhood I grew up in is striving to get. God forbid anything happen to me, my family is straight. So anything that happens after this is just me progressing as a person." Banks' personal progression is seen throughout his debut album, especially on numbers like the soul-dipped "When the Chips Are Down," which features The Game; and the Eminem-produced "Til the End," an elegiac meditation on mortality tinged with twinkling keys and bolstered by choral flourishes. On the other end of the musical spectrum is the arena-rocking "Playboy" the festive "Heart of Southside," which features G Unit Member Young Buck and horns bigger than your speakers; and the melodically cacophonous "Perfect Match," where Banks teams up with Brooklyn's Fabolous to exchange pearled strings of witty bon mots geared at the fairer sex. The Hunger For More's first single, the party-starting "On Fire" proves that Banks' music is at home in the clubs as it is the streets. "My record follows the same format of Get Rich Or Die Tryin' and Beg For Mercy but it's just me so it's a whole different sound," says Banks. "I got all new producers. I'd rather break a producer, than do what everybody else does. There's no guarantee that a big name producer is gonna give you that hit record. You can pay $100,000 for one song, there's no guarantee that it's gonna be that one. It's only what you make it. And that's what I'm gonna show everyone."

Lloyd Banks was born Christopher Lloyd twenty-two years ago and raised in Jamaica, Queens. "My mom is Puerto Rican, my pops is black," he informs. "It was kinda like when I was with my mother's side of the family I was the bad seed, I was the one who was most unlikely to succeed. And then when I was with the black side of the family, I was the angel, because all my uncles are career felons." His parents were young and never married. And his father, who choose to pursue tax-free income on the streets, spent more time behind bars then he did with his son. That left his mother to raise a young man who was close to six feet tall by the 6th grade and who started sprouting facial hair in his early teens. "My mother showed me everything," Banks says. "When I was in the third grade, she took a cucumber and showed me how to put the condom on." Like many kids in the inner city his age, Banks sought to escape the poverty and death of his environment.

Early on he took to writing various musings-ghetto poetry, loose narratives; nothing quite structured, though he was influenced by rap gods like Big Daddy Kane and Slick Rick. "I listened to Big Daddy Kane a lot, cause that's what my pops listened to," he says. Banks' favorite songs were Rick's "Young World" and Kane's "Smooth Operator," and "Ain't No Half-Steppin'." High school didn't agree with Banks, so he dropped out before his 16th birthday. The freewriting he had been doing had morphed into full-fledged rhymes, but that was a secret. "I never let nobody know I did it," he says. But he soon got his courage up. "I started rhyming outside and everybody started telling me, 'You should shop your material.' This is before I even got in the studio." Banks appeared on local mixtapes becoming one of the neighborhood's best unsigned rappers. His only competition was a childhood friend named Tony Yayo. One day, Tony, along with another childhood friend who rapped under the name 50 Cent, approached Banks with the idea of becoming a group. If Banks wanted to be down, he could be part of the crew that they were calling G Unit. Banks was down. "I always felt like if I was to get into doing rap professionally, I wanted to get into it with somebody who was from my neighborhood," he says. "Who better than people who I've known my whole life?"

Fronted by 50 Cent, the G Unit quickly redefined the urban music industry. They produced a series of street albums with original numbers and high quality artwork, making the discs something more than a bootleg, but not quite an independent release. 50 Cent was soon signed to Shady/Aftermath/ Interscope Records and released the instantly classic, record breaking Get Rich Or Die Tryin', on which Banks was featured. Then came G Unit's Beg For Mercy, which was still riding high in the top 20 of the Billboard 200 after four months on the shelves. Though these successes allowed Lloyd Banks to tour the world multiple times over, one accomplishment means a bit more than all the rest: Earlier this year, Banks was anointed as 2003's Mixtape Artist of the Year due to his appearance on G Unit mixtapes as well as his own Money in the Bank series. "I take pride in that cause I'm not qualified for a MTV Awards or a Vibe Awards or Grammys or any of that yet," says Banks. "I got my name through the mixtapes.

That's why people know Lloyd Banks today. That's where it built from. I skipped what a lot of rappers have to go through to get put on. I skipped Making the Band, I skipped [106 & Park's] Freestyle Fridays, the Lyricist Lounge -I skipped all that. I made my name on the mixtapes, on the streets. And that's the hardest thing to get right there." Despite so many things going his way, Lloyd Banks is not prepared to take it easy. "People will tell me all the time, 'Look at your set up. You're guaranteed to make it.' I get upset when I hear that. Ain't nobody guaranteed nothing. I feel like they're looking at the situation wrong cause I don't take advantage of nobody. I don't work less because you're working harder. I work real, real hard even though I know 50's there. He's there, he supports me 110%, but I don't want to put no extra pressure on him when I can do it. At the end of the day, I find myself working twice as hard."