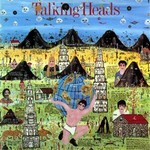 Originally released in 1985, this album saw Talking Heads get back to the simple, effective sound of their debut. Contains many popular hits, including "And She Was ", "Lady Don't Mind", and "Road to Nowhere".

David Byrne, Chris Frantz, and Tina Weymouth formed Talking Heads in the early 1970s. Jerry Harrison, formerly of The Modern Lovers, joined in 1976 and Talking Heads quickly became one of the most important bands to emerge from the New York punk scene.

Over the course of their 11-year recording career they released ten albums to critical raves, and racked up more than a few hits.

The Name of This Band is Talking Heads (Expanded Special Edition)