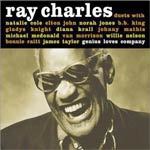 During a career that spanned nearly six decades, the late, great Ray Charles has appeared on more than 250 recordings.

He was the musician most responsible for developing soul music by merging '50s R&B with gospel-powered vocals, adding plenty of flavor from contemporary jazz, blues, and (in the '60s) country. Then there was his singing; his style was among the most emotional and easily identifiable of any 20th-century performer, up there with the likes of Elvis and Billie Holiday. He was also a superb keyboard player, arranger, and bandleader.

While he performed with various artists, Genius Loves Company is Ray Charles' final recording and ONLY full album of duets.

This historic CD features 12 duets with an array of artists, who have won a combined 79 Grammy Awards, from virtually every music genre. Genius Loves Company was recorded over a period of one year and completed in March 2004, just prior to Charles' passing.

"I've recorded with so many amazing artists in my career but never on a duets album of my own. I thought it was time to have some of the friends that I love and the artists that I admire come into my studio and sing with me live, the way we did it in the old days."
- Ray Charles, March 2004, on the genesis of Genius Loves Company.