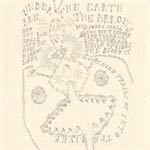 Every song on the magical 'Nino Rojo' is a folk music gem, and the combination of his guitar plucking and trembling voice provides an emotional weight to this album.

Singer-songwriter Devendra Banhart is still relatively new to the world, which finds most people comparing him to a surplus of other musicians. Banhart has drawn an unusual mix of comparisons: Billie Holiday, Beck, Tiny Tim amongst others. Yet his ability to create charming images with his abstract lyrics, abnormal time signatures, and inimitable vocals is like no other.

'Nino Rojo', is the beautiful new album from Devendra Banhart. Recorded during the same living room sessions as Devendra's acclaimed 'Rejoicing In The Hands' album, 'Nino Rojo' presents the next chapter in the career of Devendra Banhart, the most talked about singer/songwriter to emerge in years. 'Nino Rojo' features 16 new Banhart-penned tracks (with the exception of his cover of Ella Jenkins' "Wake Up, Little Sparrow"), produced by Michael Gira and Devendra himself.

Every song on Devendra's new album 'Nino Rojo' is a folk music gem, and the combination of his guitar plucking and trembling voice provides an emotional weight to this album that few previous lo-fi recordings have come close to achieving.

"A complete one-off, the world would be a poorer place without him"
- NME

"Something quite magical"
- The Independent