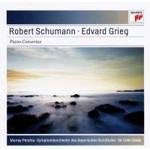 "Murray Perahia's 1987 Schumann and Grieg concertos with Colin Davis remain the most recommendable digitally recorded pairing of these war-horses, and they bloom even more via Sony's Expanded Edition remastering." (ClassicsToday)

"Murray Perahia's 1987 Schumann and Grieg concertos with Colin Davis remain the most recommendable digitally recorded pairing of these war-horses, and they bloom even more via Sony's Expanded Edition remastering. I'd also add that this release constitutes the finest of Davis' three recorded Schumann/Grieg couplings (the others are with Arrau/Boston Symphony and Kovacevich/BBC Symphony). Although Perahia remade the Schumann seven years later with Claudio Abbado and the Berlin Philharmonic, I lean toward the earlier recording. Davis' accompaniments provide more solid rhythmic underpinning in the outer movements, with fuller-bodied string tone and more carefully sculpted woodwind chording. By contrast, Abbado favors a more blended, rounder sonority. Certain details in the solo piano part emerge with greater transparency and refinement under Abaddo, such as the Finale's cross-rhythmic filigree and the voice leading in the first-movement cadenza. Yet Perahia's added thrust and greater attention to bass lines under Davis, together with more impetuous conversational give and take between soloist and orchestra in the Intermezzo clinch my recommendation.

Poetry and precision triumphantly fuse in the Grieg Concerto, where Perahia's fabulous technique and ravishing tone make this overplayed work sound quite invigorating. I particularly admire the effortlessly effected tempo relationships between sections, plus the welcome melodic emphasis with which he shapes the Finale's flashy runs and the first-movement cadenza's bass rumbles. An excellently played Finale to Mendelssohn's D minor concerto is tacked on as a bonus track."
(ClassicsToday)