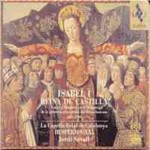 Born in 1451, Isabella I was to become heir to the Spanish throne. In 1469, she married Ferdinand, the heir to the crown of Aragon, and when her brother died in 1474, Isabella was crowned queen of Castile.

In 1497, her husband acceded to the crown of Aragon as Ferdinand II, and from that moment on, the two monarchs became the architects of the unification of Spain introducing profound reforms of the institution of the monarchy and laying the foundations of what was to become the great and mighty Spanish empire of the 16th century.

However, the "Catholic Monarchs", as they were called, were also the architects of the Inquisition and were responsibl for the expulsion of the unconverted Jews and Moslems.

Another major event of the reign of Isabella the Catholic, one which was to determine the course of history for centuries to come, was Christopher Columbus's discovery of the Americas in 1492.

As in the album devoted to Charles V (AV9814), the programme chosen by Jordi Savall for this CD and superbly performed by Montserrat Figueras, La Capella Reial de Catalunya and Hespèrion XXIillustrates the major events in the life of the great Spanish queen of the Renaissance. Iaddition to beinan extraordinary viola da gamba player and director, Jordi Savall is also remarkably gifted
"musicial production chief".

All the albums in the series are conceived, designed and executed with the greatest possible care to ensure the listener's utmost pleasure - a fact that is proved once again by this sumptuous new release.