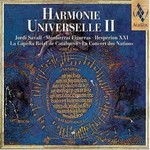 Jordi Savall is widely credited with the rebirth of the viola da gamba, an instrument which has been all but ignored since the late 17th century - the period of its greatest exponents, François Couperin, Marin Marais and Antoine Forqueray. Savall's ongoing musicological research - uncovering works of previously unknown composers such as Coperario, Cererols, Ferrabosco, Ortiz, and Guerrero - has made him a major force in the revival of early music.

"This is a great sampler of his more recent work and contains a huge variety of music. The individual pieces sound great and, as usual, the tone quality and spirit of his ensembles are perfect. If you are looking for a nice album of "early music," are interested in checking out Jordi Savall's work, or are already a Savall fan looking for a nice album to relax to, this inexpensive compilation is for you. It also comes with a color catalog of Alia Vox's current offerings." (Amazon.com)

Isabella I, Queen of Castile: Lights and shadows at the age of Isabella the Catholic (