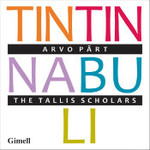 Peter Phillips and The Tallis Scholars celebrate Arvo Pärt's 80th year with a new album of his finest a cappella works and a world tour.

"It is with great pleasure that we present our tribute to Arvo Pärt in his 80th year. Tintinnabuli (from the Latin for 'bell') is the compositional style created by Arvo Pärt which informs every work on this recording. In all my searchings for inspiring contemporary music I have not come across anyone to rival him." Peter Phillips

Tintinnabuli was identified by Arvo Pärt as a compositional method in 1976, since when he has made it his own. In origin it derives from the sounds which bells emit when they are struck - a confusion of fundaments and overtones. When Pärt suffered a kind of writer's block between 1968 and 1976 he increasingly turned to early music, to the monastic lifestyle and to choral-writing. The sound of bells, so closely associated with early music, helped him and ultimately led to the inspiring sound-world of Tintinnabuli where simple diatonic melodies are set against harmonies based entirely on the natural harmonics of bells.

Peter Phillips believes that no music being written today makes a more satisfying match with renaissance polyphony than the sacred works of Arvo Pärt. In recent years he has regularly added works by Pärt to The Tallis Scholars' concert programmes, ever more convinced that his music was providing an important new perspective to the work of the older masters.

In time this conviction led to The Tallis Scholars' desire to make a recording of Pärt's a cappella compositions with the added novelty that all the works are sung in the way The Tallis Scholars sing renaissance music; with two voices to each part. It is Peter Phillips' belief that the clarity which results from this intimate scoring benefits Pärt's writing as much as it benefits that of Tallis and Palestrina.

" I chose Arvo Pärt because his music seems to add an extra, modern, dimension to Renaissance polyphony. There is a common mood, a use of space and even of silence which links the two styles. They both take the listener into a calmer, more numinous world."

The earliest work on the album is Sieben Magnificat-Antiphonen, written in 1988. The most recent work is the Nunc dimittis, composed in 2001. The most straightforward illustration of Tintinnabuli can be heard in the Magnificat while in Which Was the Son of..., commissioned by the City of Reykjavík for their Millennium celebrations, Pärt poked a little fun at two idiosyncratic aspects of local life: the way family names are organized, and the way the Icelanders pronounce their 'rrrs'. The overall result is an astonishing work, as witty as it is unlikely.

This is The Tallis Scholars' first album of contemporary music since their landmark 1984 recording of Sir John Tavener's Ikon of Light.

"These are absolutely outstanding performances. The singing is beyond reproach and the Tallis Scholars penetrate to the heart of Arvo Pärt's music. On the surface Pärt's music seems simple but there are hidden depths and these pieces are as ingenious as they are sincere. It is a brave composer - and one who is highly accomplished - who can strip his music consistently back to such bare essentials and yet speak with such simple, unaffected eloquence." (Recording of the Month MusicWeb Feb 2015)

"the purity of The Tallis Scholars' sound provides the perfect scaffolding for the pieces on this disc...And in their performance...The Tallis Scholars have presented their chosen repertoire in the way they have always done best - as a sound world of profound beauty." Gramophone Magazine Award Nomination 2015 - Choral

"The forces are modest, just two voices to a part, perfect for spreading clarity and light. Purity of tone, perfect pitch, ensemble poise...For all Phillips's iron control, these performances are never coldly correct. We know these are human beings singing...This is a gorgeous and inspiring album." (Five Stars The Times)

"Stripping down the number of voices in Pärt has palpable benefits...Not that there's any sense of power missing: in the tutti of the Magnificat, the crescendos are ringing, and again one notes how cleanly the passing of musical narrative from part to part is realised with fewer voices." (BBC Music)

The Woman with the Alabaster Box
13. Now when Jesus was in Bethany
14. Why trouble ye the woman?
15. Verily I say unto you

Tribute to Caesar
16. Then Went the Princess
17. And they brought unto him a penny