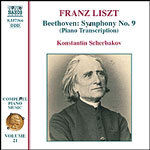 "This is a magnificent disc and listening to it is a truly uplifting experience."
MusicWeb, October 2004

"This superb disc is number 21 in Naxos's projected series of Liszt's complete piano music. Given that Leslie Howard's Hyperion series (to my knowledge, the only one that is yet "complete" although he keeps finding more to record) ran to 57 volumes, some with multiple discs, this still has some way to go. I mention this because, in one of life's coincidences, the discs in the series I have acquired previously are numbers 7 and 14 (respectively containing Rossini transcriptions and Bunte Reihe transcriptions of music by Ferdinand David), both of which were also excellent.

But, hang on a minute, this music certainly doesn't sound like Liszt and, of course, it isn't - it's Beethoven. Although I have been aware of Liszt's transcriptions of his symphonies for some time, this is my first experience of them. I approached the disc with several questions in my mind: Why did Liszt transcribe them? Why, when I can easily choose between recordings by Klemperer, Karajan, Böhm and Zinman, should I want to listen to a piano version? Even if I am interested in piano transcriptions of Beethoven's symphonies, should I really be starting with the Ninth?

I would presume that Liszt was motivated to produce his transcriptions as a vehicle for his own performance and to increase the possibility of their performance more generally; although they would only ever be accessible to great virtuosos. My initial reason for wanting to listen to this was curiosity but I will re-listen in the future because the experience was much more compelling than I had expected. It made me think afresh about a work I thought I knew well. Each time I have listened to it I have marvelled at Beethoven's music, Liszt's conception for the piano, and Scherbakov's musicianship and virtuosity.

My feeling is that the difficulties of playing the 9th Symphony on the piano must increase progressively throughout the work. The first movement is relatively straightforward compared to the scherzo, for which there is an incessant rhythmic challenge; despite this Scherbakov takes all the other repeats except the last one. In the adagio the difficulty is obviously not one of hitting the notes but conveying the feeling normally imparted in the string writing. Sensibly Scherbakov adopts a relatively fast tempo (although the duration of 12 minutes is similar to Zinman, Böhm takes about half as long again) and yet he convincingly conveys the spiritual essence of the music. But all this is nothing compared to the finale! As this began, I was really sceptical. Hadn't Liszt thought of bringing at least a tenor along with him? Can a piano really sing like four soloists and a chorus? Of course it can't but Scherbakov's piano sings for all it is worth and the words went round in my head. The experience was quite different but still a rich broth rather than a consommé. Scherbakov handles the various contrasting sections of the finale with the same skill as a great conductor and he brings off a magnificent conclusion. The fantastic glow that you should feel at the end of this work was just as intense as ever.

Second time round, listening to this disc with the orchestral score was an interesting experience. The most striking thing was how many of the notes are in the piano version, a very high proportion and certainly all the ones that matter. Curiously though, there seems to be a small cut in the scherzo of eight bars just before the last repeated section (at 9'52" on track 2). This section (on page 133 of the Dover edition of the score) is played on all the orchestral versions mentioned above. Essentially it is a repeat of the opening eight bars of this movement. I don't know whether Liszt, Scherbakov or Naxos is responsible for the omission. It would be surprising if it were Liszt because this short passage is so straightforward that even I could transcribe it for the piano (you couldn't say that for more than 99% of the rest of this work!) although perhaps these bars were not in the edition of the score he used. Whatever the explanation, I raise it as a point of interest and do not feel that it detracts significantly from his truly magnificent rendition of this movement.

The recorded sound is not absolutely top-drawer and the piano initially seemed a little harsh in tone (this is not entirely inappropriate at the beginning of this work) but my ears adapted. The booklet is rather disappointing - no need here for a biography of Liszt, rather some more detail about the transcriptions would have been appreciated. But, for me, given music-making like this, these are minor considerations.

There is competition, both from within Leslie Howard's complete Liszt series and also a complete Beethoven symphony transcription set by Cyprien Katsaris (see link to review below). Obviously, I haven't heard these discs (yet) but, regardless of their merits, Scherbakov is worth hearing as well.

I am glad I started my piano transcription experience with the Ninth because it has made me want to explore the rest of the series. Apparently Scherbakov has already recorded three discs including the first six symphonies (see links to reviews of two of the discs below) and these are already available. I shall be looking out for these and the rest of this series, whatever their place in Naxos's grand scheme. I shall also await volume 28 with anticipation - perhaps it might contain some original music by Liszt?

This is a magnificent disc and listening to it is a truly uplifting experience."
- Patrick C Waller, MusicWeb, October 2004