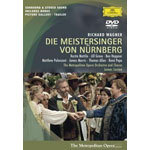 The MET video production of Richard Wagner's only comedy Die Meistersinger von Nürnberg features the revival of Otto Schenk's 1993 production in December 2001, with an unmatchable ensemble.

The American bass-baritone James Morris made his house début in the demanding role of Hans Sachs in this filmed performance. Paul Griffiths wrote in the New York Times that he sounded "as if he had been singing it all his life", and critical responses were united on the the musical qualities of Morris's performances, his "bel canto virtues" and "rhythmic suppleness" as well as his care of the text " investing every line with meaning".

The Finnish soprano Karita Mattila sang Eva when the production was new, and again in 1995, and Ben Heppner had been singing the role of her suitor since 1990 at La Scala. Like Sachs, Walther has to face a demanding solo at the very end of a long opera; for all the singer's Heldentenor credentials, Heppner takes a properly lyrical approach to the Prize Song, and, as one critic remarked, his performance had "the grace of Schubert lieder".

Thoams Alan, too, had already been seen and acclaimed throughout Europe for his detailed portrayal of the officious Beckmesser, this, however, was his first appearance in his signature role at the MET.

Throughout James Levine'saccount of this most sonorous of Wagner's scores, lyricism is to the fore, while the playing of the MET orchestra clarifies the contrapuntal textures that are one of the work's defining characteristics.

Following his acclaimed Ring cycle, director Otto Schenk has imparted a similar traditional Romantic atmosphere to Wagner's only comedy, and the production was excellently filmed by the well-known video director Brian Large.