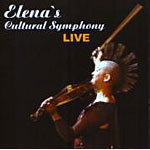 ELENA is an extraordinary musician and violin player player whose exciting arrangements of classical and traditional Maori and European compositions designed to break down the musical barriers between these diverse disciplines.

The CD's centrepiece and opening track is the Tim Whitta composition "1840 Waitangi Overture" which features the Wellington Sinfonia, the Whitireia Performing Arts group, percussionist whizzkids Strike, tenor Howard McGuire and soprano April Neho. Vivaldi's "Gloria" features Elena, the Sinfonia and the Whitireia group. Simply Fantasic, a six piece acoustic group, join Elena on "Kei a Koe e" and "Kua Rongo Mai Koe". Maori stick games as you've never heard them before (on E Papa Waiari") feature percussion group, Strike. Classical works such as "L'Apprenti Sorcier" and Beethoven's Moonlight Sonata are re-arranged by Gareth Farr (Gareth himself plays marimba with Elena on the latter track). The only track previously released on "Elena" is well worth revisiting - it is "Blue Smoke" which combines the talents of April Neho, Simply Fantastic and, of course, Elena.