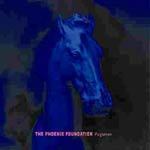 The sophomore album from this six-piece Wellington band, 'Pegasus' is already garnering high acclaim! "Nothing short of brilliant."
- Pulp

1.The Morning Pages (Samuel Flynn Scott): Samuel takes his morning newspaper very, very seriously. The morning pages is the process by which someone can kick start their creative juices by writing copious claptrap in the early hours of the day. It has nothing to do with this song but seemed an appropriate title.

2.All in an Afternoon (SFS/TPF): An omnipresent omnichord (electric auto-harp borrowed from Mike Fabulous) sets the tone for this soaring acoustic romp. The bridge was a real bitch to get right. Early mixes included an ambient tribute to Brian Eno, double speed baroque piano (a la 'In My Life') a humming section and an R2D2 style lead break.

3.Hitchcock (Will Ricketts/TPF): Written by percussionist Will Ricketts, Hitchcock is a cloaked tribute to the master of suspense. It's the soundtrack to the zombie film he never made. Dave Long plays theremin that sounds like a synth and Luke plays synth that sounds like a theremin. The video was directed by Rueben Sutherland (Ebb, Shihad etc) and carries an anti-fossil fuels message entirely of his own doing but reflecting much band tour banter in regards to peak oil production.

4.The Posh Tiger (SFS/The Phoenix Foundation): Whipped in to existence in the last week of recording (a good eight months on from the start of proceedings), After spending so much time producing other tracks the band felt great comfort in getting this song down live.

5.Through the Woods (SFS/TPF): Like many Phoenix songs this deals with the terrifying nature of romance. Yuck. The next album will be thematically devoted to alternative energies.

6.Cars Of Eden (SFS/TPF): The subject matter has something to do with an ancient civilisation obsessed with sex, god and automobiles. It features Wellington improv master Jeff Henderson on baritone sax. Why are these cars 'of eden'? Because they're naked.

7.Damn The River (SFS/TPF): This is our version of the much-overlooked art of the two-minute pop song. Very inspired by early Smiths singles. Lyrically it is of course a tale of mental fatigue, possibly brought on by too much time in a basement studio staring at the lego strata that is Pro-Tools.

8.Sea World (Luke Buda/TPF): A field recording made by Luke of deep-sea trilobites performing extinct music for the pleasure of Poseidon and his consorts. Contains trace elements of theremin (Dave Long), melotron and the all-important laugh track.

9.Slightest Shift In The Weather (SFS/TPF): Hot doggin' at its finest. Almost. Maybe.

10.Nest Egg (SFS/TPF): The band were very happy to have their old music teacher Fritz Wollner play some lovely piano on this country ballad. Dave Long also contributed some banjo and his sagely temper cast a comforting glow on the lads. It's always a pleasure to have guests as studios are best enjoyed with a cup of tea.

When the Fever Takes Hold

Jess Chambers and the Firefly Orchestra