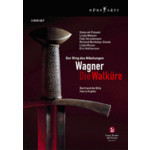 "'Last season at the Liceu the first of two parts of "Ring of the Nibelung", "Rhinegold" and "The Valkyrie", were performed… Any production of this epic work is an event, and there aren't many of them. This is an excellent version, not old-fashioned or perverse, visually a mixture of realistic and abstract, but mythic and timeless and very moving. Deborah Polaski was a fine Brunnhilde, and she continues in this role. Wotan, with a pony-tail and dark glasses, was nobly performed by Falk Struckmann. In Wotan's "Farewell" the affection between father and daughter was most expressively sung and acted.' Barcelona Business"
-- June 2004 (performance review)

In the second work of Wagner's epic cycle, Der Ring des Nibelungen, struggles of power mix with adulterous and incestuous love in an episode of dramatic vengeance.