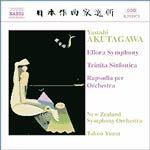 "Excellent but somewhat overlong program notes provide ample information about the composer and his times. An interesting figure, sadly neglected in western countries, this disc is a welcome introduction to a composer certainly worthy of hearing. Thanks be to Naxos for continuing to plumb the mines of interesting and unusual music, and presenting it at their ever-attractive price. Highly recommended."
(MusicWeb June 2005)


After over two hundred years of isolationism, Japan opened its door to foreign countries in the 1850s and rapidly promoted modernisation, which covered almost all fields, including a complete reform of the Japanese styles and vocabulary to conform to translations from Occidental languages. This movement gave birth to new styles of Japanese literature, in which the new Japanese language was used under the influence of Occidental literature. One of the leading figures of the trend was Ryunosuke Akutagawa (1892-1927), who is well known for his short stories, which were based on ancient Japanese fables, rewritten for modern readers. His short story Yabu no naka (In the Bush) was filmed by Akira Kurosawa, under the title Rashomon, one of the classics of Japanese cinema. Ryunosuke killed himself while still in his thirties, leaving a note of his feeling of 'vague anxiety about the future' of himself and of Japan. This incident marked the beginning of the Depression and the war, and is still remembered by many Japanese people.

Ryunosuke, who was born and bred in Tokyo, had three sons. The oldest son Hiroshi became a great actor of Shingeki, a new theatrical group born in the process of westernization, famous for his Hamlet and appearances in many films, including Kurosawa's Dodesukaden and Nagisa Oshima's Night and Fog of Japan. The second son Takashi was killed in Burma during World War II. The youngest son Yasushi, who was only two years old at his father's suicide, became a composer. As a child, Yasushi listened eagerly to his father's collection of records, and particularly loved Stravinsky's L'Oiseau de feu and Petrushka. He started studying the violin and during his days at the Annexed High School of Tokyo Higher Normal School (now Tsukuba University) decided to become a composer. He started piano lessons before entering Tokyo Music School (now the Music Department of Tokyo University of Fine Arts and Music) in 1943, in the war. His first teachers there were Hermut Fellmer, who was invited from Germany, Qunihico Hashimoto, who had studied with Egon Wellesz in Vienna, Midori Hosokawa, who had been a pupil of Franz Schmidt in Vienna, and Kan'ichi Shimofusa, who studied under Hindemith in Berlin. Akutagawa had particular affinity with Hashimoto, a lyrical, urbane melodist, whose qualities Akutagawa shared. Towards the end of the war, when educational possibilities were limited, Akutagawa was sent to the army band with many other students and saw the end of the war there in the summer of 1945. He returned to the school and studied with Akira Ifukube, who joined the faculty after the war and, having spent his early years in a remote region in the northern part of Japan, had an idiosyncratic compositional style based on ostinato made up of brief motifs. The lessons with Ifukube were blessings to Akutagawa, as he was strongly influenced by Stravinsky in his childhood.

After graduation in 1947, Akutagawa made his mark as a composer with two orchestral works written in a characteristic style, where Hashimoto's lyricism and Ifukube's dynamism meet: Trinita Sinfonica (1948) and Music for Symphony Orchestra (1950) [Naxos 8.555071). Success brought immediate popularity. He was the son of a great writer, good-looking, proficient in both writing and speaking, politically determined and actively energetic. From then until his death, Akutagawa continued to attract public notice as a leading figure not only in music but also in general culture. His compositional work extended to a variety of fields, with an opera, symphonies, ballets, orchestral pieces, chamber and piano music, songs for solo voice and for children, commercials and various organizations, marches for wind band, music for some hundred films, radio broadcasts and plays. He formed a group 'The Three' with his friends Ikuma Dan and Toshiro Mayuzumi, and their activities led the Japanese music scene in the 1950s. He played an important rôle in managing the Japan Society for Contemporary Music, JFC (The Japan Federation of Composers, Inc.) and the Suntory Music Foundation. He also assumed the post of director of JASRAC (The Japanese Society for Rights of Authors, Composers and Publishers). With a mission to promote wider knowledge of classical music, he led the 'Utagoe-Undo', a kind of public singing movement, in the 1950s, and conducted one of the most skilful amateur orchestras, the New Symphony Orchestra, from the 1950s until his late years, without accepting any fees, in order to draw a clear line between the commercialism of professional musicians and the amateur. From the 1960s he appeared often in weekly television and radio programmes as conductor and presenter, as well as publishing books on music. In the 1980s he became the central figure of the antinuclear movement. After his death from cancer his influential and busy life was commemorated by the Suntory Music Foundation, with the foundation of the Akutagawa Awards for Composers.

Akutagawa's creative life falls into three periods, 1947-1957, 1957-1967, and from then until his final years. In the first period, he strove to bring together the rhythmical energy of Stravinsky and Ifukube, with the lyrical style of Hashimoto, finding a solution in the socialist realism of the Soviet Union, in the work of Prokofiev, Shostakovich, and Kabalevsky. A result of this synthesis came with his Trinita Sinfonica and Music for Symphony Orchestra, as well as Symphony No.1 (1955) and Triptyque for String Orchestra (1953). From 1954 to 1955, he spent six months visiting the Soviet Union and China via Vienna, and built up strong ties with the two nations. In the Soviet Union he met Shostakovich, Khachaturian and Kabalevsky, and his Triptyque received a number of performances in Communist countries. In China he met Ma Sicong and Jiang Wenye, and performed his works with the Shanghai Symphony Orchestra. After returning to Japan, he continued his cultural exchange with the two nations, and conducted various works by Prokofiev and Shostakovich, giving the first performance in Japan of Shostakovich's Symphony No. 4. He also made friends with Shchedrin and Khrennikov, and in Japan was associated with left-wing parties in the labour movement, with which his 'Utagoe-Undo' had a close relationship.