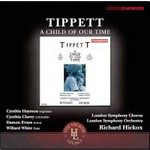 Recreating in contemporary terms a traditional form in Western music, one that goes back to the Lutheran Passions of J.S. Bach and the great Old and New Testament oratories of Handel, and drawing on the familiar musico-dramatic conventions of the genre - recitative, aria, ensemble, chorus, chorale, and the continuous presence of the orchestra - Tippett both re-affirms and transforms the genre. The most striking and brilliant transformation is the composer's choice of the Negro Spiritual in place of the congregational hymn.

This oratorio, composed between 1939 and 1941 and premiered in 1944, was born out of a very personal sense of human deprivation and hardship; during the hard times in England in the thirties Tippett had shared his choral craft with community workers, and during the war he inspired unemployed professional musicians and amateurs as a choral and orchestral conductor at Morley College.

"Hickox's version establishes its place against severe competition largely through the exceptionally rich recording and its distinctive choice of soloists, a quartet of black singers." (Three Stars Penguin Stereo Guide)

"Of all the versions I've come across there is no all-round alternative I would prefer over this superb Chandos recording. Other performances have their own special moments and different qualities, and this one is certainly pitched at a slightly lower emotional edge than for instance Tippett's own recording. Its effect is however as much cumulative as it can be immediate, and if you take the performance as a whole it provides as overwhelming an experience as any." (MusicWeb Aug 2015)