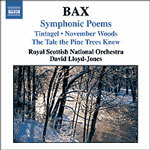 There are all the rich colours of a glorious Celtic twilight in these scores. You won't be blamed for believing that the spirits of Tristan and Isolde still roam the ruins of Tintagel or Fand, the Circe-like goddess of the sea, is offshore tending her watery garden."
(William Dart NZ Herald)

"Drawn from David Lloyd-Jones' excellent set of Bax symphony recordings, this collection competes in four out of five works with Bryden Thomson and the Ulster Orchestra on Chandos. Whereas Thomson has Summer Music, Lloyd-Jones offers The Tale the Pine Trees Knew, a more interesting and substantial work. In general this Naxos issue offers tauter, livelier performances than does Thomson, and this prevents the music from degenerating into a typically shapeless Baxian blob, as it has a tendency to do, particularly November Woods and The Garden of Fand. Lloyd-Jones also has the finer orchestra and a leaner basic sonority, less atmospheric than Thomson to be sure, but with a rhythmic crispness that puts a bit more muscle and sinew on Bax's opulent textures (check out Tintagel, which delivers a real rush of excitement in its central section). The engineering complements the performances, having fine clarity and impact. If you're in the market for a single disc of Bax tone poems, or even a single disc of Bax, then this one certainly fills the bill."
-- David Hurwitz, www.classicstoday.com, 25 July 2005

The Garden of Fand

The Tale the Pine Trees Knew