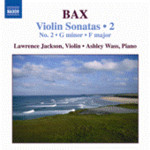 "Committed and thoughtful performances of some of Bax's most deeply-felt music concerned with the horrors of World War I and the tragic events of the Easter Uprising in Dublin."
(MusicWeb Jan 2008)

A far cry from the heart-on-sleeve romanticism of his First Violin Sonata (Naxos 8.557540), Bax's Second Violin Sonata reflects the composer's concerns regarding the First World War. This is particularly evident in the second movement, described by the composer as a 'dance of death' in which the violin remains muted throughout. The Legend and Ballad were composed around the time of Bax's finest symphonic poems and share those works' refined drama as well as their lush exoticism. The unnumbered Sonata in F, actually Bax's fourth and last Violin Sonata, was suppressed by the composer during his lifetime as he soon scored it as the Nonet. It was not performed as a sonata until the celebrations for the centenary of Bax's birth in 1983.

Bax: Symphony No. 6 / Into the Twilight / Summer Music

Symphony No.5 in C sharp minor / The Tale the Pine-Trees Knew
more suggestions…