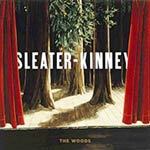 Honest-to-god guitar heroics / solos, new depth and heaviness to the songs, fuzzed out lows cropping up in places formerly reserved for staccato highs - all on this, Sleater-Kinney's 7th album.

Sleater-Kinney is a three-piece rock and roll combo from the wilds of Portland, Oregon. The group have paid their dues and left their mark, not only in their native Pacific Northwest, but the world over. The dual and dueling guitars and voices of Corin Tucker and Carrie Brownstein have produced 6 albums in the last 10yrs. 4 albums and 7yrs ago they were joined by the fantastically insistent drumming of Janet Weiss. But enough with background already...

'The Woods' is the title of the new Sleater-Kinney album and it's their 7th full-length. Produced by Dave Fridmann [Flaming Lips, Mercury Rev, Low], 'The Woods' reveals a very different side to the band. Like many things with sevens on it, it features an itch, a need to try new things. Sleater-Kinney stretch out a little here, and how.

Honest-to-god guitar heroics / solos, new depth and heaviness to the songs, fuzzed out lows cropping up in places formerly reserved for staccato highs - all of this surrounding and infiltrating the constant in the Sleater-Kinney program: three, breathing, playing as one with unfettered passion and emotion. This is exciting stuff!