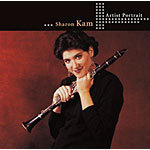 Sharon Kam was titled "a most imaginative and individual artist" by the "Gramophone" magazine. Her Teldec Classics recordings prove her being equally at home with the classical repertoire as with contemporary music and Jazz.

A frequent participant in summer festivals, Sharon Kam has appeared at the Ravinia, Verbier, Schleswig-Holstein, Vancouver, Risør und Marlboro Festivals and is a regular guest at pianist Lars Vogt's Festival Spannungen in Heimbach, Germany. In Summer 2003 she made her Debut at the Salzburg Festival, where she was immediately reengaged for 2005 and 2006.

Sharon Kam is a dedicated performer of contemporary music and regularly performs concertos by composers such as Manfred Trojahn, Bjørn Kruse und Brett Dean. She has premiered Krzysztof Penderecki's Clarinet Concerto and Quartet as well as Peter Ruzicka's Clarinet Concerto „Erinnerung", to name a few. Concerto premieres by Halvor Haug and Herbert Willi (Salzburg Festival) are planned for the near future.

A lover of chamber music, Sharon Kam regularly collaborates with colleagues as Heinrich Schiff, Lars Vogt, Stefan Vladar, Christian Tetzlaff, Marie-Luise Neunecker, Antje Weithaas, Gustav Rivinius, Tabea Zimmermann and Boris Pergamenschikov, as well as with the Tokyo, Artemis, Artis, Kuss, and American String Quartets. Her collaboration with pianist Itamar Golan has been acclaimed by critics and audiences alike for over a decade.

Sharon Kam's recordings for Teldec include the Weber concertos with Kurt Masur and the Gewandhaus Orchestra of Leipzig, for which she received the Echo Prize as 'instrumentalist of the year' in 1998, a recital CD with pianist Itamar Golan and a recording of the Mozart and Krommer concertos. As a result of a longstanding relationship with Krzysztof Penderecki, a recording of his clarinet works, conducted by the composer, was released in 1999. Her latest CD 'American Classics' with the London Symphony Orchestra, conducted by her husband Gregor Buehl, was awarded the prize of the "Deutsche Schallplattenkritik."

Sharon Kam is a native of Israel, where she studied with Eli Eban and Chaim Taub. At the age of 16, she made her orchestra debut with the Israel Philharmonic Orchestra under Zubin Mehta. Later she was invited to take part in the historic joint concert of the Berlin and Israel Philharmonics, a performance videotaped by Sony Classics and released in 1992. She was encouraged by Isaac Stern and is a graduate of the Juilliard School Of Music, where she studied with Mr. Charles Neidich.