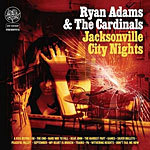 With strong songwriting, solid performances and "old school" country flavor, this is a perfect follow-up to 'Cold Roses'. The arrangements and melodies are enchanting, and the album features a haunting duet with Norah Jones.

'Jacksonville City Nights' is the second of an unprecedented three albums Adams is to release in 2005. 'Cold Roses', released in May, received high praise from the press and was considered by many as Adam's finest work as a solo artist. With its strong songwriting, solid performances and "old school" country flavor, 'Jacksonville City Nights' is a perfect follow-up to 'Cold Roses'.