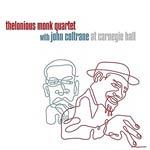 This recording is a never-before-heard jazz classic that documents one of the most historically important working bands in the history of the music. "The music is spectacular - two legends at their best"
- The New York Sun

"The music is spectacular - not just as good as the sum of its considerable parts, but even better! This is the kind of CD that will immediately start turning up on top-10 lists, not only for 2005 but for all time. In the same way that 'Kind of Blue' showcases four giants in top form, this is a glimpse of two legends at their best"
- The New York Sun

This recording is a never-before-heard jazz classic that documents one of the most historically important working bands in the history of the music, a band that was both short-lived and, until now, thought to be frustratingly under-recorded.

The concert, which took place at the famed New York hall on November 29, 1957, was preserved on newly-discovered tapes made by Voice of America and located at the Library of Congress in Washington DC early in 2005.

'Thelonious Monk Quartet with John Coltrane at Carnegie Hall' is the only full-length professional recording known to exist of this remarkable piece of jazz history.

"Every track is an utter gem... This extraordinary recording belongs in every jazz fan's collection"
- Los Angeles Times

"an instant classic... the musical equivalent of discovering a new Mount Everest"
- Newsweek

"The discovery of this recording is a bit like scoring a tablet etching of the Sermon on the Mount. It captures two behemoths trading licks just before Coltrane changed the course of jazz"
- Details

"An instant and indispensable classic"
- Cargo

"nothing short of momentous"
- Time Out New York

"Believe the hype. Here is an unearthing of such historic proportions as to constitute a major discovery, and, as a record to enjoy on its intrinsic merits, it's that and more"
- DownBeat

There Will be a Light

Half the Perfect World