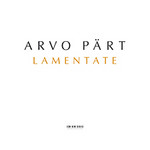 "Pärt's moving lament for the living brings from him rarely heard power. It's not often that you can connect so directly with the inspiration behind a new composition, but Arvo Pärt's Da pacem Domine was brought about by an encounter with Anish Kapoor's colossal sculpture Marsyas, exhibited at Tate Modern. It was an extraordinary piece and Pärt's response is truly arresting. Lamentate, performed exquisitely by The Hilliards, is equally strong."
Editor's Choice Gramophone Magazine Nov 2005

New music of Arvo Pärt appears only on ECM. The close collaboration with the great Estonian composer that began more than 20 years ago with the epochal "Tabula rasa” – the recording that launched the New Series - continues with an album which incorporates, in the title composition, some of the most powerful and arrestingly physical music Pärt has written. It also embraces the tender prayer for peace, "Da pacem Domine”, beautifully performed by the Hilliard Ensemble, with Sarah Leonard singing soprano, which opens the album.

Pärt's tenth recording for ECM, "Lamentate” is issued in time for his 70th birthday on September 11th.

Written for large orchestra and solo piano, and commissioned for a series of live events at Tate Modern, "Lamentate” was inspired by Pärt's encounter with the enormous sculpture "Marsyas”, by Bombay-born artist Anish Kapoor. 150 metres long, "Marsyas” filled the Tate Modern's Turbine Hall for a year. Named for the Greek satyr flayed alive by the god Apollo, the piece consists of three enormous steel rings joined by a single span of dark red PVC membrane. The colour was intended by the artist to suggest blood and the body, and the sculpture dwarfed the viewer, too large to be viewed in its entirety from any single position: "I wanted to make body into sky”, says Kapoor.

For Arvo Pärt the dimensions of the work were breathtaking: "My first impression was that I, as a living being, was standing before my own body and was dead – as in a time-warp perspective, at once in the future and the present. ... In this moment I had a strong sense of not being ready to die. And I was moved to ask myself just what I could still manage to accomplish in the time left to me.”

"Lamentate” then, is a lament not for the dead, but for the living, who must struggle "with the pain and hopelessness of this world.” The solo piano role is designated by the composer to represent "one”, the individual, buffeted by fate. It can be viewed, he writes, "as a first person narrative”. Pärt: "The work is marked by diametrically opposed moods... Exaggerating slightly, I would characterize these poles as 'brutal-overwhelming' and 'intimate-fragile'.” In the present recording, the solo protagonist Alexei Lubimov sails the sea of circumstance with extraordinary fluency, negotiating ferocious tidal waves and ominous calms. The luminescent quality to his playing, which recently served Silvestrov's "Metamusik” and "Postludium” so well is very much to the fore, sustaining the sense of quasi-improvisational freshness that was one of Pärt's original goals for this work. Conductor Andrey Boreyko, marshalling the instrumental forces of the SWR Radio Symphony Orchestra Stuttgart, maintains the emotional pressure throughout a very engaged performance of a work that concludes in a dialogue of reminiscences, of laments and consolations.

Among the works Arvo Pärt has composed over the past 25 years Lamentate is exceptional, not least by virtue of its expansiveness. Through-composed as a single movement that lasts nearly forty minutes, it attains dimensions for which Pärt has not otherwise striven in his individual pieces.

"Lamentate” was first performed at the Tate Modern in February 2003, in a collaboration which brought together Pärt, Anish Kapoor and American theatre director Peter Sellars. At the time – on the eve of the Iraq War – Sellars said of "Lamentate”, "Pärt's music transmutes pain to sorrow and then to repentance. It takes you through a whole series of actions, reactions and further stages of contemplation. It is about taking personal responsibility for pain and violence, and how to change your life, not pointing the finger at someone else. The apocalypse, which the work indicates, is a signal for every one of us to engage in a personal act of repentance and transformation.”

Whatever its outward form, Pärt's spiritual message is consistent. On this disc, "Lamentate” responds to the plea for peace that is "Da pacem Domine”. Pärt composed the work to a commission from Jordi Savall for music for a peace concert, embracing the world's musical and religious traditions, held in Barcelona on July 1st, 2004. Its musical point of departure was the 9th century Gregorian antiphon, an intercession in the liturgy which has inspired many composers through the ages:

Da Pacem Domine
for mixed choir or soloists
a cappella