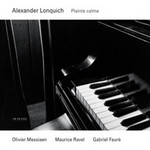 "Mr. Lonquich is a thinker, and thinkers at the keyboard are as likely to be wayward as illuminating. He is a bit of both, and certainly an original."
(NY Times)

The lyricism of Fauré - one of the most enduring popular of French composers - is revealed in his Five Impromptus), which Lonquich scatters like jewels through his album. Ravel's "Gaspard de la nuit" is intensely romantic and a virtuosic tour-de-force. And the Eight Preludes (1929) comprised Olivier Messiaen's first published work - inspired by the atmospheres of Debussy, but already full of the transcendent sensitivity to sound-colour that was to make Messiaen the most outstanding composer of his generation. Lonquich gives insight into the characters of the three composers but also, in contrasting them, shows the continuity of the experimental impulse in French music, which has so often accompanied its songful qualities.