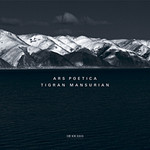 "This is open, honest fare - no games, no gimmicks, no special effects. The musical expression of a poetic image is what engages the composer. Nothing else intrudes because nothing else matters."
American Record Guide

"From solo voice to luminous clusters, both the choral writing and the distinctive inflexions of the Armenian language itself are utterly beguiling. … Made with the participation of the composer in Saghmosavank Monastery, Armenia, the live recording by the 35-voice Armenian Chamber Choir under its director and principal conductor Robert Mikeyan possesses a rough-hewn grandeur quite unlike anything I've heard before. In "Ars Poetica", more than any other work of Mansurian's, one hears the ancient roots of Armenian folk and church music and their deep interrelationships."
Peter Quinn, International Record Review

This is open, honest fare - no games, no gimmicks, no special effects. The musical expression of a poetic image is what engages the composer. Nothing else intrudes because nothing else matters....The singing pays admirable homage to Mansurians's music. The recording was made at a concert in an Armenian monastery and is rich and satisfying.
Phil Greenfield, American Record Guide

The Armenian Chamber Choir is a superbly disciplined and well integrated ensemble … There is a resonance in the Armenian language which you just do not get in Western choirs, or even Russian ones for that matter - a certain glottal openness which gives the music a timeless, ageless quality. … Lovers of beautifully composed choral music should treat themselves to this recording, and those seeking to discover a new name will not be disappointed.
Dominy Clements, Music Web