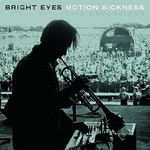 These live versions reveal a new maturity in Conor Oberst's work. The sound of a band bounding around the world in 90 days and an absolute must for Bright Eyes fan!

Bright Eyes is the pseudonym used by Conor Oberst, a singer / songwriter who rivals Ryan Adams for sheer volume of output - though his intimate, earnest music draws listeners further in than Adams' faux-retro ever could.

'Motion Sickness: Live Recordings' is the sound of Bright Eyes, the full live band, bounding around the world in 90 days, documenting the 'I'm Wide Awake It's Morning' tours from early 2005. The resulting live recordings from throughout the tour were culled into the 15 tracks found here - the third album released by Oberst in 2005.

The album features many recordings from the then brand new and critically acclaimed 'I'm Wide Awake It's Morning' album alongside songs from other recent Bright Eyes albums, non-album tracks and two covers: Feist's "Mushaboom" and Elliott Smith's "The Biggest Lie" as well as a 24-page booklet with an extensive tour diary and on-the-road photos.

These live versions reveal a new maturity in Oberst's work, 'Motion Sickness' showing that while he may not wear bombast as convincingly as he once did, he knows it and is moving forward - to an approach as measured, deliberate and genuinely heart-rending as his old songs were anarchic and accidental. An absolute must for Bright Eyes fans!