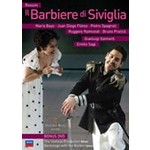 Juan Diego Flórez in one of his greatest stage roles in a highly acclaimed new production from Madrid's Teatro Real.

This sparkling new production of Rossini's comedy of love is led by two of today's greatest opera stars - María Bayo as the young ward Rosina and Juan Diego Flórez as her handsome suitor, Count Almaviva. The wily Figaro (the Barber) is Pietro Spagnoli, Bruno Practicò is the hapless guardian Don Bartolo, and the cunning singing teacher Basilio is the renowned Ruggero Raimondi. Filmed in widescreen High Definition, this DVD captures brilliantly the Teatro Real production as it progresses from an elegant silver-&-white to a kaleidoscope of colour for the boisterous finale.

The disc features both CD-quality stereo and a DTS 5.1 surround sound, as well as full subtitling in English, French, German, Spanish and Chinese.

This release also offers a bonus disc, headed by a 58 minute documentary giving the story behind Rossini's opera, as told by members of the cast and the director. Complementing this programme is a 16 minute featurette, entitled 'Backstage with the Barber' giving a fascinating glimpse behind the staging of this production. Both films are carry the same selection of subtitles as does the opera. Amongst other additional features, the disc features a photo gallery of over 100 rehearsal and performances photos.