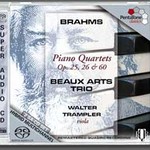 The first quartets written by Brahms were not strings quartets, as one might expect, but these piano quartets, with which Brahms refers to the works written by Mozart in this genre and on which he worked simultaneously

"Anyway, you may print an illustration on the title-page. How about a head – with a pistol in front of it. Now you can get an idea of the music! For this purpose, I will send you my photograph! You can also add a blue evening jacket, yellow trousers and top boots, as it seems you enjoy printing in colour.” One would not necessarily expect Johannes Brahms, who considered himself an advocate of "absolute” music (i.e. music which is of itself and applies only to itself), to have chosen these words, in order to announce one of his chamber-music compositions, of all things, to his publisher Simrock. Nevertheless, this is indeed what Brahms wrote in a letter accompanying his Piano Quartet Op. 60: although this quartet did not receive its première until 1875 in Heidelberg, he had started working on it together with his two other Piano Quartets Op. 25 and Op. 26 in the 1850's. The link with Goethe's Werther is more than clear and refers to Brahms's years of suffering caused by his passionate feelings for the inaccessible Clara Schumann. Although it is hard to prove the link between circumstances taking place in Brahms's life and a direct implementation of these in his work, the darkly foreboding minor tone is at least an indication of the hard times he was going through. The two first movements of the so-called Werther Quartet were written in 1855/56. "Picture a man, who is ready to put a bullet through his head and for whom absolutely nothing remains,” thus wrote Brahms about the first movement, which resounds to a forte introduction with the piano striking the tonic note. The rather angular themes point to the emphatic musical idiom of the young Brahms. However, unusual harmonic structuring also underlies the rather gentle second theme. Loud outbreaks continually jeopardize the development process of the music. The C-minor mood of the Scherzo also remains foreboding and irreconcilable, until the E-major Andante is prepared harmonically to represent the only resting place in the work. Although the Finale undertakes a number of attempts to break up the forbidding, built-up energy, the C-major key of the final cadenza still does not manage to impart a true sense of reassurance.

Brahms's chamber music
The first quartets written by Brahms were not strings quartets, as one might expect, but these piano quartets, with which Brahms refers to the works written by Mozart in this genre and on which he worked simultaneously.

In the Quartet No. 1 in G minor, Op. 25, we encounter one of the "most important chamber-music works ever to have been written by Brahms” (Hansen), i.e. the expansive first movement. Here, Brahms's chamber-music skills can be heard in all their glory, including especially the numerous possibilities for reworking the themes and motifs in the music. Here, the principle of the "developed variation” is especially pronounced. The second, fourth and sixth are the main intervals, which are subject to a permanent stream of development that takes on an almost symphonic character. The Intermezzo in C-minor takes over from the Scherzo.
The tiniest of motifs can be heard above continuous repetitions of tones.

The Andante con moto, which is written in three-part Lied form, combines a lyrical string movement (A-parts) with march-like sections in C-major (B-part). The Finale, a Rondo alla Zingarese, is an exotic-sounding movement full of character and musical fire. This movement is considered by some to be too light-hearted, perhaps just an attempt to compensate for the complexity of especially the first two movements. Arnold Schönberg attempted to get a grip on this complexity by means of the orchestral arrangement of the G-minor Quartet which he wrote in 1937, "so as finally to be able to hear everything written in the score.”

The Quartet in A, Op. 26 differs significantly from its predecessors. Lasting almost 50 minutes, its more reserved tone and intimate character of the work made a clear statement. In the first movement, the determining triplets of the first theme appear rather to be introducing a piano piece. Here too, as in Op. 25, there are plenty of suspenseful moments; however, they appear more as emphatic accents and do not determine the mood of the movement. The second movement (Poco adagio) contains a wealth of gestures: lyric, dramatic and expressive moods exchange places among themselves. The Scherzo takes off in a dance-like direction and assumes the character of an intermezzo, although formally following the momentous sonata movement, after which it leads into the likewise dance-like Finale. The gypsy-like harmonies of the main theme are offset by a more leisurely second theme. The work ends in a farewell celebration.

Symphony No. 4 in E minor Op. 98 / 8 Hungarian Dances for Orchestra