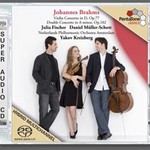 "..the Double Concerto one of the most beautiful and idiomatic readings on disc in recent years. Four stars." Hugn Canning, Sunday Times CD of the Week 6th May 2007

"I have never before come across such a major talent. He is years ahead of me."
Thus spoke the Hungarian violinist and composer Joseph Joachim of his colleague Johannes Brahms, who was his junior by two years. Joachim and Brahms had met each other in Hanover in 1853, and from that moment onwards they became inseparable. Not only did they give many concerts together, but during 1853 and 1854 Brahms even lived in Joachim's household for some time. In a letter to his girlfriend Gisela von Arnim, dated October 20, 1854, Joachim gives a detailed characterization of his friend. He writes the following: "Brahms is the most confirmed egotist that one can imagine, although he is not aware of it himself as, thanks to his sanguine nature, everything truly pours forth from his quill without effort in the most direct act of genius - however, now and then with a lack of consideration (not with a lack of support, as that would be all right with me!) that hurts, as it shows a lack of culture." This sounds as if Joachim considered Brahms to be an egocentric clodhopper, but on the other hand, he genuinely admired the ideals for which Brahms strove, without making any compromises: "All he cares about is being undisturbed in the bliss he encounters in his music, in his belief in searching for a higher, fantastic world - and the way he manages to avoid all unhealthy emotions and imagined grief of others is the true work of a genius - in that way, he is truly healthy, just as his carefree approach to life itself is highly appealing, yea, even magnificent."

At that time, Brahms was an avid reader of romantic literature and a fervent supporter of the romantic theory of art. For instance, he read Jean Paul and Novalis, and jotted down various interesting statements by these writers in a little notebook which he had entitled "Schatzkästlein des jungen Kreislers" (= the little treasure trove of the young Kreisler), with a nod to the fantasy figure from Schumann's Davidsbund. Joseph Joachim also tended to write a short note in this book every so often, mostly in the form of an aphorism. The following aphorism about the relationship between man and artist is very striking: "Only that person is a complete artist, for whom life intervenes to glorify art, and vice versa - the person for whom art is not a random matter to be donned and removed like a piece of jewellery." A conspicuous fact is that Joachim signed most of these aphorisms with the initials f.a.e., which he sometimes also jotted down as notes.

The abbreviation "f.a.e." stands for Joachim's motto, "frei, aber einsam" (= free, but lonely), which Brahms also liked to use. Thus he wrote as follows to Joachim in 1888: "For me, f.a.e. remains a symbol, and I am happy to bless it, in spite of everything." Furthermore, Brahms also used his own motto which, in view of his light-hearted character (as described by Joachim), can be considered characteristic of him: f.a.f: "frei, aber froh" (= free, but happy).

As a symbol, f.a.e. attained almost a cult status. Thus a private concert took place on October 28, 1853 in the house of Robert and Clara Schumann, during which a surprise was sprung on Joachim: he was presented with a violin sonata based on the motto f.a.e., which had been especially composed for him jointly by Robert Schumann, Albert Dietrich and Johannes Brahms. In fact, Brahms wrote almost all his violin works for Joachim, and also regularly asked advice of the violin virtuoso, as he himself did not play this instrument. In his turn, Joachim had repeatedly urged Brahms to compose a violin concerto for him. However, he made it clear that he did not wish the work to be written in the style of the Romantic virtuoso concertos: it was to be a symphonic concerto to continue in the line of Beethoven's Violin Concerto. (Thanks to Joachim's performances, this concert was accepted at the time as standard concert repertoire). During the summer of 1878, spent as usual in the Austrian village of Pörtschach am Wörthersee, Brahms wrote a concerto for violin and orchestra, keeping in mind the performance style of his friend. In August, he sent Joachim a couple of "violin passages to try out". The latter reacted enthusiastically, and soon the passages expanded into the finale of the Violin Concerto in D. Brahms worked like a man possessed. At a certain point, the two middle movements of the originally four-movement concerto disappeared into the wastepaper basket and were replaced by the Adagio; the middle movement as we know it now. On January 1, 1879 Joseph Joachim gave the first performance of Brahms' new Violin Concerto at the Leipzig Gewandhaus, with the composer himself conducting.

Brahms' Violin Concerto most certainly deserves the qualification of a symphonic concerto; one need only to listen to the orchestral introduction of no less than 90 bars! Nevertheless, it still offers plenty of room to demonstrate virtuoso playing - especially in the cadenza, which Brahms had left to the fantasy of Joachim, and in the finale, which is indebted to the Hungarian salon style so popular in Austria during the nineteenth century. Nevertheless, that did not manage to protect the work against critics who held other expectations of solo concertos. Hans von Bülow wrote the following: "Max Bruch's Violin Concerto in G is for the violin, but Brahms's Concerto is clearly against it." And according to various reports, Pablo de Sarasate, the great Spanish violin virtuoso decided against including the concerto in his repertoire, as he refused to stand by with the violin idle in his hands to listen to the breathtakingly beautiful oboe solo which introduces the slow movement.

But when Brahms took the side of Joachim's wife, the mezzo-soprano Amalie Schneeweiss, during divorce procedures in 1880, the relationship between Brahms and Joachim cooled off considerably. Clara Schumann reports that the two friends even refused to speak to one another for a number of years, although Joachim continued to perform Brahms' music. In order to break through this impasse, Brahms wrote his Double Concerto for Violin, Cello and Orchestra in the summer of 1887, hoping that Joachim would take on the violin part. Indeed, that turned out to be the case: on October 18 that year, the first performance of the Double Concerto took place in Cologne, featuring Joseph Joachim on the violin, Robert Hausman on the cello, and Brahms as conductor. Joachim was grateful for Brahms' gesture and the rift between the two friends was repaired. Clara Schumann writes as follows: "This concerto is as it were a work of reconciliation - Joachim and Brahms are now talking to each other again for the first time in years."

The Double Concerto contains a good many musical references to the friendship between Joachim and Brahms. Thus it contains a number of allusions to the Violin Concerto in A minor by Giovanni Battista Viotti: this was one of Joachim's favourite showpieces, of which Brahms was also very fond. But there is more. The thematic material of the first movement is based on the f.a.e motif. When the soloists enter with a cadenza-like passage on top of the main theme, it is the solo violin that opens with the notes f.e.a. (an inversion, which was also often employed by Joachim). Finally, at the end of the first movement, following many dialogues between the solo instruments, there is a long passage in which both soloists play in thirds: perhaps a musical symbol for the rediscovered friendship?

"Frei, aber einsam" (= free, but lonely): the motto for the friendship between Brahms and Joachim, two great masters who were connected by their capricious approach to life. Just as Joachim never again felt any desire to commit himself to another woman after the break-up of his marriage, Brahms never even got married. Just before beginning work on his Double Concerto, he wrote as follows to his 'confidante' Clara Schumann: "I need absolute solitude, not just in order to achieve my very best, but also simply to think my own thoughts. That is my nature. However, on the other hand, it is also very easy to explain: after all, someone who, like myself, enjoys life and art, is only too eager to enjoy both - and to forget all the rest. Perhaps it is also the most correct and sensible thing to do. But right now, with a new, major work in front of me, I am still quite happy about it, and have to say to myself: I would not have written it, had I been enjoying life so exuberantly along the Rhine and in Berchtesgaden."