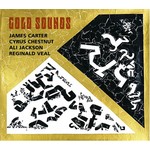 The iconic indie group Pavement's songbook reinterpreted by NYC's finest jazz musicians! "An enthralling record - a meaty dose of jazz that is as infectious as the pop from which it is derived." - All About Jazz

"An enthralling record - a meaty dose of jazz that is as infectious as the pop from which it is derived."
- All About Jazz mag

This album sprang from one question: what album would people want to buy that doesn't already exist? Sort of like the idea of a fantasy sports league applied to music. Check the lineup of musicians: Downbeat magazine saxophonist of the year James Carter; Cyrus Chestnut, recently described as legend in New York magazine, on keyboards; Reginald Veal, fat-bottom bassman of choice for discerning artists like Wynton Marsalis and Cassandra Wilson; and white hot drummer Ali Jackson, who has also worked with Marsalis and was recently compared to Art Blakey.

As for the source material, well, Pavement's classic album 'Crooked Rain, Crooked Rain' struck a chord with music fans everywhere - after all, when you cut through the band's image as hipsters or slackers and just examine the songs, what is left is one of the finest collections of tunes of any pop/rock band since R.E.M.'s heyday. Step aside shimmering guitars though...

The Gold Sounds quartet bring Pavement's lo-fi recordings to vibrant life, the shiny melodies glistening as the group up the musical ante of the performances and send the messy spirit of the originals down roads the rockers could never have imagined. This is fire-breathing music in the tradition of free-jazz legends Pharoah Sanders and Archie Shepp!

"If you're a Pavement fan, you owe it to yourself to check out what these guys do with the songbook. If you're a jazz fan, these tunes might as well be undiscovered standards."
- Allmusic (4 / 5 stars)