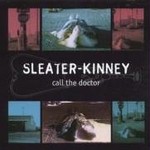 Originally released on Chainsaw Records in 1996, this was the second album from Sleater-Kinney. The noise got noisier, the lyrical messages got deeper and they were truly stamping their authority on the US indie rock scene.

Sleater-Kinney is an indie rock trio originally from Olympia, Washington, influenced by the riot grrrl movement of the '90s. Currently calling Portland, Oregon home, the girls are signed to SubPop and in 2005 released their 7th album, the outstanding 'The Woods'. They were a standout at Big Day Out 2006 and played a blistering set to a packed house at the Kings Arms.

Now their sophomore album is available again - it was originally released on Chainsaw Records in 1996.

Their second album, 'Call The Doctor', did things that couldn't be done on the first - there was a second voice, with it's urbane, sexy drawl fitting exactly around the first, which also slotted in to what was happening between the guitars - already finishing each other's lead lines and chunky punky playing. This was a group with a sound that defined who they were!

The noise got noisier, the lyrical messages got deeper and Sleater-Kinney were truly stamping their authority on the US indie rock scene. Powered by riffs that seem unstoppable even though they're not very fast, Corin Tucker's voice never struggles more inspirationally against the world than when it's facing down the dilemmas of the interpersonal.

Few have played rock's 'tension and release' game for such high stakes - they wanna be our Joey Ramone, who can resist that? But listen hard and you'll realize they also wanna be our Thurston Moore [Sonic Youth]. They want it both ways. And get it.

Sleater-Kinney weren't waiting for the transition from promising girls to women, they were taking. And they were allowed.