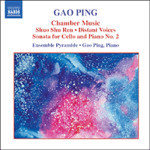 "Shuo Shu Ren, or The Storyteller, was inspired by my childhood memories of listening to folk stories. Folklore and the oral tradition were very much a part of people's lives before television invaded China in the 1980s."

Shuo Shu Ren, or The Storyteller, was inspired by my childhood memories of listening to folk stories. Folklore and the oral tradition were very much a part of people's lives before television invaded China in the 1980s. In the period in which I grew up, there were regular power cuts in the evening, and neighbours always came together to share stories in the dark. The stories never seemed to run out. We visited the cha guans (tea-houses) where tea was served and fantastic tales would be spun by expert story-tellers. Often I would run home from school to catch the late afternoon broadcast of a particular story-teller's account of some epic tale, usually based on a classical novel in a historical setting. This was before my family owned a television set, and the memories of these joyful moments are as vivid now as 25 years ago. My interest in storytelling never subsided. From a composer's perspective, the theatrical characteristics of Chinese story-telling, which range from shouting and vocalizing to intense facial expressions and body movements, are extremely seductive and lead naturally to almost operatic ideas. I have always thought of myself as a story-teller of sorts, but in place of words I use music. In Shuo Shu Ren, the communal stories that a storyteller shares are interwoven with the personal narratives of the individual. Blurring the boundaries between myth and reality, this work exists within the space of a "third reality". In the epilogue to the piece, as the stories come to a close, what remains is the theme of the story-teller who sighs in desolation while fragments of stories flash by, ephemeral as light. Shuo Shu Ren was commissioned by the Zurich-based Ensemble Pyramide who gave its first performance in January 2002. I dedicate this work to my dear friend, the flautist Markus Brönnimann, without whom this work would never have come into being.

Distant Voices was written in 1999. I played the first public performance in the New Music Festival in Cincinnati in the same year. The only one of my compositions in which authentic Chinese folk melodies play a part in the motif, Distant Voices is unique within my body of work. In this piece I use traditional melodies to pay tribute to the musical and singing styles of my native land. Exploring compositional possibilities through these source melodies without distorting their essential folkloric qualities, I recast the rich, microtonal palette of the folk tradition through exploring the sonority of the piano. The folk-songs employed here are Nostalgia from Inner Mongolia, Love Song from Kangdin from my native Sichuan, and Blue Flower from Shanbei. Each melody serves as the departure point for the three movements that are developed through processes resembling the variation form. The first movement is introspective and desolate, reflecting the narrative of a migrant labourer's homesick lament upon seeing snow falling; the second movement is tender and wistful; and the third movement is exuberant and restless, evoking dancing and drumming. I dedicated each movement to a remarkable musician, the composer Joel Hoffman, my father, the composer Gao Weijie, and the pianist James Tocco.

Sonata No. 2 for Cello and Piano (2001) was written for the American cellist Nicolas Photinos, who is a member of the Chicago-based new music ensemble Eighth Blackbird. Subtitled Departure, or in Chinese, Shi, the piece takes its inspiration from a line of poetry by the Song Dynasty poet, Su Dongpo. The line of verse roughly translates as "From here and now, I shall depart with my little boat, for the rest of my life, on the sea I would float". Though written in five movements, the work has a sense of unbroken continuity, resembling what is called Chi in Chinese art. The first, third, and fifth movements are based on the same material, a tune of innocent simplicity and melancholy, which I call "the theme of parting". It is stated first by the solo cello in the first movement, followed by piano solo in the third movement Intermezzo, and finally by both instruments in the last movement. Each of the statements is treated differently and possesses a unique atmosphere, which suggests that while the words of each departure remain more or less the same, the emotional state varies. The word "departure" can be interpreted as an ending as well as a beginning. My work explores this double meaning in its structure and treatment of melodic and rhythmic materials, as well as in its overall mood. At the end of the piece, as the notes from the cello's ostinato figure gradually ebb away and only two pitches (G and A) remain, the music returns to its beginning. Nicolas Photinos and I gave the first performance of this work in the Cincinnati New Music Festival in summer 2001.

Two Soviet Love Songs for Vocalizing Pianist were composed in December 2003. The idiosyncratic mannerisms of performers have long fascinated me. Often I find myself guilty of habits potentially disturbing a performance. The unconscious movements or noises one makes while performing, however, are inevitable and, perhaps, better not to be avoided. They are there for a good reason. It would be unthinkable if Glenn Gould were asked to play without humming or gesticulating. In fact these two pieces were inspired to some extent by watching a video tape of Gould's performance, as well as hearing the composer-pianist Frederic Rzewski performing his The Road. The pieces were originally meant for the private entertainment of accomplished pianists who also like to sing, but, as I played them after their completion, I felt that their theatricality seems to demand an audience.

The two Soviet tunes are something I grew up with. They are still extremely popular in China and often heard in karaoke houses. In Katyusha, besides the tune itself, I also quote Shostakovich's Tenth Symphony (the Scherzo movement) as well as a familiar American show-tune which Shostakovich himself once arranged for orchestra.