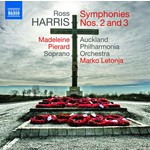 Described as "often beautiful and sometimes frightening" (NZ Listener), Ross Harris's Symphony No 2 is a setting of poems on the subject of New Zealand soldiers shot for desertion in World War One.

Writer Vincent O'Sullivan's deeply felt descriptions of violence, love and tragedy are reflected in a moving and dramatic score. Symphony No 3 is inspired by the paintings of Marc Chagall, and develops and transforms klezmer-like tunes as its basic material. These symphonies were composed for the Auckland Philharmonia Orchestra, and both won the SOUNZ Contemporary Award. This very exciting release is the Auckland Philharmonia Orchestra's debut recording for the Naxos label.

Ross Harris was born in Amberley, New Zealand. He studied in Christchurch and Wellington and taught at the Victoria University of Wellington Music Department for over thirty years. In 1985 he was awarded a QSM for his opera Waituhi (with libretto by Witi Ihimaera) and in 1990 he received the CANZ citation for services to New Zealand music. In 2004 he took early retirement from teaching and began working as a freelance composer. His residency with the Auckland Philharmonia (2005-2006) led to the composition of three symphonies. He has been awarded the SOUNZ Contemporary Award (the most prestigious annual prize for composers offered in New Zealand) four times and been a finalist eight times in the thirteen-year history of the award.

Auckland Philharmonia Orchestra is the leading arts organisation in New Zealand's largest city. In more than seventy performances annually, the APO presents a full season of symphonic work and supports both the NBR New Zealand Opera and the Royal New Zealand Ballet. Through its numerous education pro-grammes the APO offers opportunities to 25,000 young people and adults nationwide to participate in mu-sic, ranging from hip-hop and rock to contemporary and classical. More than 100,000 people hear the or-chestra live each year, with many thousands more reached through special events, other media and re-cordings on the APO Live and Naxos music labels. Most APO concerts are broadcast live nationally and streamed online.

Flight - music for flute and harp