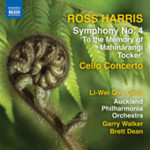 Commissioned by the Auckland Philharmonia Orchestra, Ross Harris's Fourth Symphony is a tribute to and a portrait of poet and songwriter Mahinārangi Tocker. Her movingly evocative words and songs serve as references for each movement, while a solo viola increasingly takes on her character and personality. The Cello Concerto was inspired by the brilliant playing of cellist Li-Wei Qin, its single continuous movement a dramatic dark-to-light journey filled with rich singing lines and extravagant virtuosity. Ross Harris's Symphonies 2 and 3 can be heard on Naxos 8.572574

"There is no question that the Auckland Philharmonic are superbly in control as is Brett Dean, himself a violist and composer and just forging an extra career as a conductor. The recording is vivid and allows the music space although the quiet passages need to be turned up. The loud ones are very powerful. It's just a pity about the short playing time. Ross Harris is so little known in the UK and probably in Europe. The brevity could have been alleviated with an extra, shorter orchestral piece such as the prize-winning 'Sleep of Reason'. Anyway, I, for one, will look out for more of Harris's haunting orchestral works." (MusicWeb Oct 2014)

"Harris evidently possesses a richly stocked imagination and his deeply felt, rewardingly meaty portrait-in-sound is as exuberantly inventive as it is meticulously crafted...Both performances are admirable. Garry Walker and Brett Dean secure exemplary results from the Auckland orchestra, and Li-Wei Qin lends hugely eloquent advocacy to the concerto." Gramophone

Cello Concerto
Symphony No. 4, "To the memory of Mahinarangi Tocker"