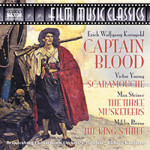 "An ensemble that has this genre of music running clearly in its collective blood....A valuable issue altogether"
(MusicWeb July 2006)

"Splendidly realised and vitally performed this is another valuable addition to the Naxos Film Classics Series."
(MusicWeb Sept 2006)

"This Naxos series is a really valuable contribution to preserving the music from films that will not all stand the test of time and, in many cases would have sunk without trace but for the music. I take my hat off to them for the series and to the people who so painstakingly managed to reconstruct the scores. Plaudits also go to Richard Kaufman and the Brandenburg Philharmonic Orchestra, Potsdam, a recently formed ensemble that grew out of two other orchestras, one of them the DEFA Orchestra in Babelsburg, that over the years from the pre-Nazi era to the unification of Germany was responsible for the playing of the scores of so many classic films. An ensemble that has this genre of music running clearly in its collective blood....A valuable issue altogether"
(MusicWeb July 2006)

It is entirely appropriate that this recording of music for epic adventure films should include Captain Blood (1935) because it was with that greatly successful swashbuckler that the age of romantic symphonic movie music in Hollywood began. Erich Wolfgang Korngold, acclaimed for his operas and concert works, had arrived from Vienna the previous year to arrange and conduct the Mendelssohn score for the Warner Bros. filming of A Midsummer Night's Dream and studio executives were so impressed with his work they asked him if he would be interested in writing an original score for Captain Blood. Korngold was intrigued with the idea and accepted, thus beginning one of the most influential careers in film music composition.

Based on Rafael Sabatini's 1922 novel, Captain Blood is set in the brutal reign of England's King James II (circa 1688) and tells of a young physician who is falsely accused of treason and shipped off to Jamaica as a slave. Peter Blood (Errol Flynn) leads a revolt among his fellow prisoners and, after seizing a ship at Port Royal, becomes a pirate. By this time he has also fallen in love with Arabella (Olivia de Havilland), niece of the Jamaican governor. Blood and his crew plunder shipping in the Caribbean until such time as Blood receives a commission to serve in the navy of King William – James having been ousted – to fight in England's war against France. After defeating a French attack on Jamaica, Blood is elected the governor with Arabella his obvious bride-to-be.

Captain Blood was an immediate success and made an overnight star of young Errol Flynn. With its sweeping score, full of romantic melodies and exciting descriptive music, the film also made Korngold a Hollywood star. He signed a contract with Warner Bros. and over the next dozen years wrote fifteen scores that proved film to be an avenue for serious composition. Among those scores, Korngold composed what most consider to be two other classics in the realm of swashbucklers – The Adventures of Robin Hood (1939) and The Sea Hawk (1940), both again starring Flynn. Indeed, in the case of both Flynn and Korngold, Captain Blood was a matter of being in the right place at the right time with the right talents.

Besides igniting Korngold's career in Hollywood, Captain Blood made it clear to filmmakers for generations to come that, to truly succeed, swashbuckling films demanded athletic scoring from master composers. The films required throbbing love themes for heroines viewed from afar, orchestral fireworks for any amount of dueling and swordplay, proper pomp and circumstance to accompany persons of rank and privilege and, finally, a measure of humor to add humility to the swashbuckling heroes themselves. Some of the best swashbuckling scores from Hollywood composers include Alfred Newman's Black Swan (1942), Max Steiner's Adventures of Don Juan (1949) and Victor Young's Blackbeard the Pirate (1952). Ironically, Korngold was reluctant to take a complete bow for Captain Blood, partially because brief bits of Liszt were employed when time ran short in scoring sessions, plus a couple of engaging cues by Korngold orchestrator Milan Roder. In the end, Korngold insisted he be credited only with musical adaptations, even though he scored nearly the entire film with original music. Such creative integrity would prove rare in this field.

Like Korngold, the Hungarian-born Miklós Rózsa was able to maintain his reputation as a composer of concert music and chamber works while also becoming a master of film music composition. Rózsa wrote some ninety film scores of every kind but it was with historical and biblical vehicles like Quo Vadis (1951), Ivanhoe (1952), Ben-Hur (1959) and El Cid (1960) that he excelled. In 1955, while under contract to MGM, he scored The King's Thief, which proved to be yet another example of a score being better than the picture for which it was written. Loosely based on the adventures of Captain Thomas Blood, the man who managed to steal the crown jewels from the Tower of London in 1671, the hero (Edmund Purdom) elects to serve the cause of King Charles II (George Sanders) when he realizes the king's chief minister, the Duke of Brampton (David Niven), intends to gain control of England. Such plans are, of course, foiled but not with the flair that might have made The King's Thief a memorable film. Be that as it may, Rózsa provided a perfect period setting and a suggestion of the excitement that might have been.

Alexander Dumas' The Three Musketeers is the most filmed of all classic novels with more than fifteen European and American versions to date. The 1935 RKO production is not among the best, largely owing to the miscasting of the unexciting Walter Abel as D'Artagnan and character actors too old to be musketeers. The costuming and swordplay, however, were splendid. But what makes this film really worthwhile is the music score by Max Steiner, whose pioneering ways in film music pre-date even Korngold, particularly in such RKO scores as King Kong (1933) and The Most Dangerous Game (1932). The spirit of the musketeers and their 'All for One and One for All' gallantry bristles in the music along with the romance and adventurous action furnished by Dumas. Steiner, who had won an Oscar for his landmark scoring of The Informer in 1935, realised this filming of the durable classic needed all the help it could get. Just how well he succeeded is cheerfully apparent in this suite expertly put together by John Morgan after a thorough study of the Steiner score. It is doubtful if any composer will ever capture the elan and bravado of Dumas' musketeers better than did Max Steiner with this music. The spirited, quicktempo march used in the film's remarkable fencing sequence is but one shining example.

No apology needs to be made for MGM's handsome 1952 production of Scaramouche, which has the most important of all qualities needed for swashbucklers – a sense of flair, in this case buoyed by a lilting music score by Victor Young. MGM purchased the film rights soon after the Sabatini novel was published in 1921. A year later the public flocked to see the popular Ramon Novarro in a silent filming of this spectacular tale of the adventures of a dashing nobleman in the years of the French Revolution. A generation later they lined up to see an even more splendid Technicolor version with Stewart Granger as the hero and Mel Ferrer as the villain. The hero, André Moreau, is a lighthearted playboy, supported by the stipends of his unknown father. When the payments cease he finds he is the son of the deceased Duc de Gavrillac, which is a complication because he is in love with the beautiful Aline de Gavrillac (Janet Leigh). He retreats, assuming her to be his sister, and she in turn is courted by the elegant Marquis de Maynes (Ferrer), reputedly the finest swordsman in France. The two men run afoul of each other in an argument, with Andre forced to make his escape because he cannot fence. He vows one day to have revenge. In the meantime he hides out with a theatrical troupe and assumes the disguise of a masked clown called Scaramouche, all the while taking fencing lessons from a master swordsman. The troupe's leading actress, Lenore (Eleanor Parker), falls in love with Andre but finds his heart is set only on Aline. Eventually Andre challenges the marquis to a duel and beats him, but for some reason hesitates to kill him. It turns out the marquis is his half-brother, that Andre is not a Gavrillac and can therefore marry his adored Aline.

A beautifully balanced film of romance and heroism, Scaramouche is supported all the way by the music of American-born composer Victor Young. In Hollywood since 1936, Young had garnered plenty of experience scoring such costumed epics as Reap the Wild Wind (1942) and Samson and Delilah (1949) along with adventure films like For Whom the Bell Tolls (1943) and Around the World in Eighty Days (1956). He was a master melodist whose tunes often made memorable songs – "Stella by Starlight” from his chillingly impressionistic score The Uninvited is just one example. It takes only one hearing of Young's music for Scaramouche to know that this was a film for which he was the perfect choice.

A Note on Reconstruction
Most of the music in this album was reconstructed from piano/conductor scores especially for this recording. The sad fact is many of our classic American film scores no longer exist in their fully orchestrated, original versions. Luckily, multiple copies of the original piano reductions were made for purposes of conducting, copyright and timing considerations. At best, however, these piano scores (on three or four line staves) are only an approximation of the full scores. Wrong notes and missing harmonic and melodic material abound. It is an extremely tedious task to re-orchestrate this music and, with the audio of the original soundtrack as a guide, come as close as possible to the composer's original intentions. In some cases the 'conductor score' consisted merely of a violin part! It is our sincere aim to present this music as authentically as possible.