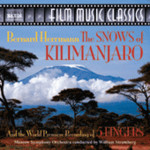 "This is another fine addition to Naxos's growing catalogue of Film Music Classics. Stromberg brings strong and intelligent performances from the Moscow Symphony Orchestra and the sound is bright and clear in the label's best manner."
(MusicWeb July 2008)

"This is another fine addition to Naxos's growing catalogue of Film Music Classics. Stromberg brings strong and intelligent performances from the Moscow Symphony Orchestra and the sound is bright and clear in the label's best manner. The notes, by both Joseph Caporiccio and Christopher Husted (Manager, Bernard Herrmann Music), are outstanding."
(MusicWeb July 2008)

The Snows of Kilimanjaro - popular at the time with both critics and audiences - offered the major ingredients that Darryl Zanuck deemed necessary for success: showmanship, sex, and adventure. The story of a man searching for meaning in his life was a recurring theme in Darryl F. Zanuck productions. He had already used it in The Razor's Edge and would do so again two years later in his multimillion dollar production of The Egyptian. But in all three films he loaded the message with adventure and daring sex scenes - everything to keep the audience coming back for more.

Both The Snows of Kilimanjaro and 5 Fingers date from the years of transition Herrmann faced when the CBS Symphony was disbanded in October 1950. He made the logical choice, which was to settle in Los Angeles and rely on film scoring while he worked to revive his concert career. The film assignments he took were separated by returns to New York, where he wound up his affairs in New York City and began the legwork on the première staging of his opera Wuthering Heights, which he completed during this period. It was a period of high stress and high hopes, and he eagerly anticipated a state of renewed stability that would make possible a return trip to England, where he had encountered a welcoming success as a conductor much stronger than in his own country.

It simplified Herrmann's situation to have such a solid foothold at 20th Century-Fox, where Alfred Newman ran an industrious and well-oiled music department. Further simplification came with the steady stream of exotic assignments - the political upset of an extra-terrestrial visitor, a Turkish espionage intrigue, an African safari memoir, and many more to come - each requiring evocative, unique treatment. At Fox it was possible for Herrmann to keep his musical impulses fresh with challenges of this sort, supported by a magnificent orchestra of which he could make any demand. Though he complained aplenty about his situation in the early 1950s, he bided his time in a largely ideal circumstance.