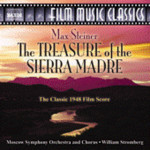 Max Steiner's music for The Treasure of the Sierra Madre is one of the composer's best remembered scores and gathered recognition by winning the Venice World Award in 1948.

Although the film was a critical success, it didn't have the box office appeal Warners had hoped for. Its reputation, however, has grown over the years and it is now considered one of the true classic American films.

There have been previous suites recorded from this score, which amounted to highlights of the main thematic material. I thought the time was right for a substantially complete recording of Steiner's score. I say substantially because I eliminated a couple of cues that ran only for a few seconds and also some of the repetitious sections where extreme paranoia has taken over Bogart's character in the last third of the picture.

Because of the nature of the film, much of Steiner's music was composed for transitions and montages rather than his usual approach of underscoring long dialogue sequences or action scenes. This approach makes many of his cues shorter than normal, so I have lumped many of these cues together to make a more effective listening experience away from the film. However, all the music on this recording is in "film chronological order."

From an orchestrational point of view, this score is very complicated. In addition to the large studio orchestra, Steiner added numerous "colour" instruments to represent a "gold effect." These include two harps, two pianos, celesta, two vibraphones, glockenspiel, triangle, and various sized suspended cymbals. I was also determined to implement all the instrumentation Steiner indicated in his sketches, which his orchestrator, Murray Cutter, brilliantly realized in full score. The composer coloured his music with instruments associated with Mexico, including accordion, guitars, marimbas, xylophones, Mexican drums and shakers, as well as saxophones, harmonica, four mandolins, and choir.

The Treasure of the Sierra Madre (restored J. Morgan)