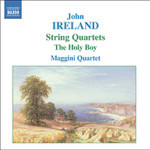 "Ireland's student works 'as dull as dishwasher'? Here's a disc that will make you think again. One has to admire Ireland's perseverance if the old story is true. It is said that the young composer took his first string quartet to his hero, Stanford, who sniffily dismissed it as 'dull'. However, Ireland (who must have been shattered by the remark) kept his confidence and, as the Maggini emphatically show here, we are the luckier for it."
Editor's Choice - Gramophone Magazine (August 2006)

John Ireland studied at the Royal College of Music where his teachers included Frederick Cliffe (piano), Walter Parratt (organ) and Charles Villiers Stanford (composition). During the first decade of the twentieth century he worked as an organist, choirmaster and pianist, and established his name as a composer with works like the Phantasie Trio (1906). The impact of the Second Violin Sonata (1915-1917) at its première in 1917 made Ireland a national figure overnight and within 24 hours of its publication all copies had been sold. From 1923 to 1939 he taught at the Royal College of Music where his pupils included Britten. He embarked on a disastrous marriage in 1926, which was quickly annulled, and a subsequent deep friendship with his pupil Helen Perkin also ended painfully.

Many aspects of Ireland the man are mirrored in his music. His lonely, shy personality had its roots in an unhappy childhood and perhaps accounts for the melancholy strain in his music. Primary inspirations were landscapes such as the Channel Islands, Dorset and Sussex, and in particular those sites of antiquity whose association with man stretches back aeons, for instance, Chanctonbury Ring on the South Downs. To this can be linked the influence of pagan mysticism in the writings of Arthur Machen. Works reflecting these characteristics are the orchestral The Forgotten Rite (1913), Mai-Dun (1920-21) and the Legend for piano and orchestra (1933). The piano was an important medium for Ireland apparent in the fine Piano Concerto (1930), and solo works like Decorations (1912-13), Amberley Wild Brooks (1921) and Sarnia (1940-41), as well as in major chamber works, for example, the three piano trios. His last major composition was a significant film score for The Overlanders (1946-7). Finally his profound knowledge of English poetry is reflected in the diversity of poets he set, including Housman in The Land of Lost Content (1920-21) and Sylvia Townsend Warner in Songs Sacred and Profane (1929-31).

The two string quartets date from Ireland's student years at the Royal College which he had entered at not quite the age of fourteen in 1893. Although his first and second subjects were piano and organ, Ireland harboured ambitions as a composer, and particularly wanted to study with his idol, Stanford. According to reminiscences he told to his housekeeper and friend Norah Kirby (and although her chronology is incorrect), the First String Quartet was intended as a work which would so impress Stanford that he would take on Ireland as one of his pupils. The work was completed in March 1897 and was supposedly rejected by Stanford as 'Dull as ditchwater, m' bhoy'. Stanford, however, subsequently arranged for a group of students to perform it and Ireland was encouraged by the praise given by Hubert Parry (the Director of the College). Ireland referred to both the first quartet and the second quartet, completed the following September, as RCM scholarship pieces, and in the event the result was successful since in the same year Ireland was awarded a four-year scholarship to study with his hero.

For all their assured writing for the medium, Ireland's quartets show not a trace of the mature composer's personal voice; their models are Beethoven and Brahms (who, although close to the end of his life - he died the month after Ireland completed the quartet - was viewed by the young composer as a giant amongst contemporary figures and whose music was also especially admired by Stanford.)

The principal ideas for the first movement of the Quartet No. 1 in D minor, which is cast in traditional sonata form, are laid out in an expansive exposition that is repeated. They comprise a gently lilting, pastoral melody; a fanfare-like flourish; a Brahmsian second subject aspiring upwards and an animated, jerky rhythmic figure. Particularly effective in the development section is the passage where, with the viola to the forefront, the music takes on the character of a dreamy waltz. A fleet Beethovenian scherzo follows marked by rhythmic drive and a flowing theme in the contrasting trio section. The slow movement grows out of a noble expansive melody played by the first violin, which is repeated an octave higher. There is a short contrasting section, offset by the steady pulse of the cello, before the main theme returns on both violins rising to an eloquent climax. Once again the first violin leads the way in the Finale with a purposeful, busy main theme, which is contrasted by a warmly romantic Brahmsian second subject. In the centre the main theme is subjected to various fugal techniques, before the main ideas are repeated and the quartet concludes with a vivacious coda.

Given Ireland's idiomatic writing for string quartet in his two student works, it is a shame that he never returned to the medium in his maturity. He maintained, however, that he found the prospect daunting, writing to the composer Elisabeth Lutyens, 'I have never had the temerity to complete another'. Consequently the only work for string quartet from his main career is an arrangement, made in 1941, of the third of his Four Preludes for piano, The Holy Boy, originally composed on Christmas Day 1913. With its wistful melody and subtle shifts of harmony it is quintessential Ireland, and ostensibly this 'Carol of the Nativity', as Ireland later embellished the title, is a lullaby for the Christ child. There was, however, a subtext, for the primary inspiration was Bobby Glassby, one of the choristers at St Luke's, Chelsea, when Ireland was the organist and choirmaster, who became one of the composer's protégés. It seems likely too that the title also refers to a poem by Harold Munro, Children of Love, which has the opening line, 'The holy boy/Went with his mother out in the cool of the day'. The Holy Boy became one of Ireland's most popular works and over the years he made several versions for different instruments and forces.

What is evident in the Quartet No. 2 in C minor is how Ireland's writing for the medium has gained assurance in the six months since the composition of the first. The melodies, albeit still derivative, have more character in themselves as in the brooding opening theme of the first movement played by the second violin which plunges the music straight into the drama and reveals the influence of another contemporary master - Dvofiák. But it is still the fingerprint of Brahms that imbues the elegant second subject with its grace notes and descending sequences, heard initially on first violin and then viola. The slow movement, labelled Nocturne, demonstrates Ireland's ear for colour as he exploits the use of mutes. Initially only the first violin is unmuted as it plays a meditative, sentimental theme. It dons its mute too for an agitated, contrasting section and for the repeat of the main theme, before, after a bar's rest, all the instruments play without mutes producing a most effective change of timbre. Once more Ireland turns to the model of Beethoven in the fast third movement, which also bears a designated title, Scherzo. The main idea pounds along vigorously, in contrast to the mellifluous trio section. Ireland casts the finale as a theme and variations, creating a variety of moods and opportunities for the instruments along the way, for instance the animated third variation, the graceful fourth, the fifth in which first the cello, then viola, take pride of place, and a final burst of energy in the concluding Vivace variation.