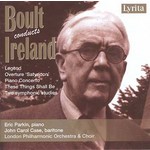 "The 1970s origins of many of Lyrita's too long delayed CD revivals need hold no fears for any purchaser. The forty plus year old sound remains an object lesson taught by the analogue tradition to the digital era. Not the essential Ireland apart from Forgotten Rite but full of vitality and imagination"
(Recording of the Month MusicWeb Feb 2007)

"I think record collectors might agree that there are one or two jewels in their collection that they return to again and again. In the late 1960s I bought the Lyrita LP, SRCS36 with These Things Shall Be one side and the Ireland Piano Concerto on the other. The rest of the programme listed above has been added to make up the 77 minutes average CD playing time. I have just about worn the LP out with repeated playing. I well remember listening to the glorious middle section of These Things Shall Be in the record department of Harrods, London's premier department store and being bowled over, so much so that I immediately purchased a copy. It was the first time I had heard anything by John Ireland; and it was the beginning of a life-long love affair with his music. Pretty well peerless performances of key John Ireland works. For me, this CD not only qualifies as a Recording of the Month but it has to figure in my best recordings of 2007 list."
(Recording of the Month MusicWeb April 2007)

Two Symphonic Studies (Fugue and Toccata) arr. Geoffrey Bush in 1969 from material composed by Ireland for, but unused in, the film The Overlanders [11:13]