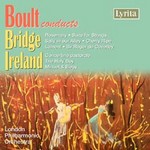 "Immaculately turned Bridge and Ireland … fascinatingly partnered...The Ireland is given a full-blooded performance with a gripping sound typical of Boult's EMI recordings...Concertino Pastorale is one of Ireland's most touching works and this version has never been surpassed for its sumptuous and elegiac tone. The string sound has no steel, only silver, and an oaken attack. This is Ireland full of vitality and perhaps influenced by the young Tippett's Concerto for Double String Orchestra. It also has that resonance, vitality and liveliness that will remind you of the Lyrita recording of Boult's Moeran Sinfonietta."
(MusicWeb June 2007)

Recordings issued in the last thirty years have given us the much-needed chance to get to know some of Frank Bridge's more radical later works — works which show an exploring, often elusive and sometimes disturbingly introspective musical mind. Oration, Phantasm, the 3rd and 4th string quartets, and the piano and violin sonatas are examples, but there are others.