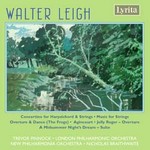 "The composer, Walter Leigh, is little known today yet was undoubtedly one of England's gifted and versatile composers"
(MusicWeb Aug 2007)

Walter Leigh, born in 1905 and killed in action near Tobruk in 1942, was a craftsman-composer of a sort commoner in the 18th than in the 20th century. Almost all his music was written for immediate use. Like Haydn, he would not have dreamed of fulfilling a commission without ascertaining the probable capabilities of his performers. He could plug in to any number of different idioms according to the needs of the occasion. He seems to have been little concerned with self-expression, or the desire to write his own biography in music. His own character emerges by the way as we listen to the music, though his versatility and powers of adaptation were so great that it is not easy to guess who the real Walter Leigh was, or where, but for his tragically early death, his remarkable talents might have taken him.