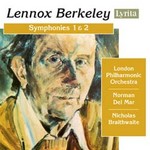 "These are fine and handsomely recorded performances"
(MusicWeb June 2007)

"Great to have this landmark recording issued on CD. My original vinyl is scratched with over-use - especially of the fantastic Second Symphony"
(MusicWeb July 2007)

"Norman Del Mar and Nicholas Braithwaite are the heroes of the hour, energizing their orchestras in the idiom with flair and introspective intensity."
(MusicWeb Oct 2007)

"Lyrita has done well to re-release Lennox Berkeley's first three Symphonies. I wonder if the archive has a recording of the Fourth?...It is impossible to say what version is 'best'. However I would say that for me, the Lyrita disc does have the edge. It is probably because these are the recordings I came to know over the last thirty odd years." (MusicWeb July 2007)

Lennox Randal (Francis) Berkeley was born at Sunningwell Plain, near Oxford, on 12 May 1903, into an aristocratic family. He attended Lynam's (later the Dragon School), Oxford, Gresham's School, Holt, and St George's School, Harpenden, where he had his first work performed. He went up to Merton College, Oxford, to read French, Old French and Philology and he rowed. He was cox of the Merton VIII for three years but cannot have taken his studies seriously since he left with a fourth class degree in 1926. He had hardly got into his stride as a composer in his Oxford years but whilst there he became the first to set Auden's poetry (two songs now lost), was intrigued by early music and wrote for its instruments, such as the harpsichord owned and played by his flatmate, Vere Pilkington, and the conductor Anthony Bernard started to give the first of several performances of his music with the London Chamber Orchestra.

Orchestrations by Sir Henry Wood (Incls Mussorgsky-Pictures at an exhibition)